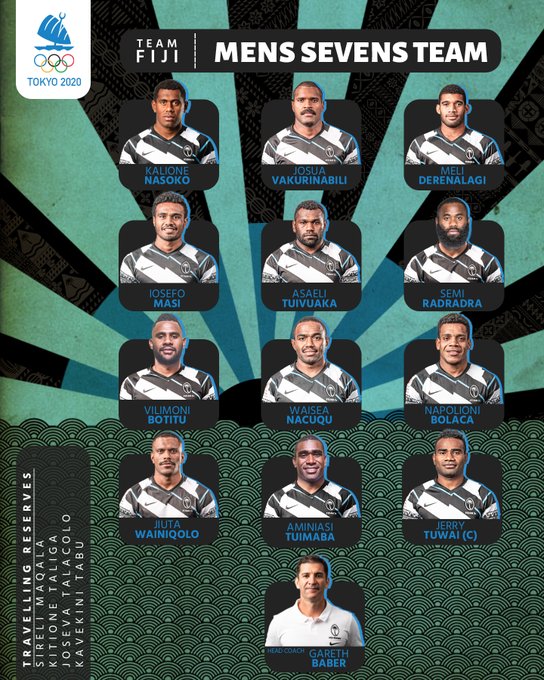 Fiji Rugby is thrilled to announce two strong and experienced sevens teams which will be part of Team Fiji’s campaign to the Olympic Games in Tokyo Japan later this month.

After competing in the Oceania 7s a fortnight ago, coach Gareth Baber and Saiasi Fuli have finally penciled in their 12-member squad along with traveling reserves.

Baber said “The Olympic Games is a one off event which we are going into. I believe the biggest challenge is the fact that we haven’t had the time to get the rhythm and flow associated with playing in the World Rugby Sevens Series.

Therefore, the Oceania tournament became an important opportunity for those players who have less experience as well as those who have returned from Europe ,to show the quality which I look for.

The men’s team is laced with experience, with 2016 Olympic Games gold medalist Jerry Tuwai given the charge to lead the pack.

Jiuta Wainiqolo and Iosefo Masi who put up an impressive show during the Oceania 7s have also made the cut into the 12.

Stalwart utility Semi Radradra is also in the mix and joins the team this week in Japan.

Baber said “I’m really excited in what the group brings, it’s a balance between the power which is a big part of our game and the pace that we are able to put into it.

We continue to look to command the aerial battels on the field as well as developing our strength at set piece. We have built the team and the capabilities around putting pressure on our opponents and as a result there has been a balance in the selection of the squad to reflect this”

He added that Radradra has been training in Europe and is confident he will pick up the momentum once they meet and begin preparation in Japan.

“I know him as an individual, an athlete and he keeps himself in a supreme condition which is why he always wins the battle. He is blessed to have the skill level of a 7s player even-though he predominantly plays 15s and has done remarkable work for us when he played for us either in 7s or 15s code” said Baber.

He also mentioned that the young players in the squad have ticked all the boxes for selection during the training camps in Fiji, Australia and at the Oceania 7s tournament.

“They have done exceptionally well in getting into this group. That’s been on the back of their perseverance, sacrifice not only by them but their families as well.

The men are in Pool B at the Olympics and will play Great Britain, Canada and Japan, kicking off on July 26.

Women 7s coach Saiasi Fuli also revealed that selecting his final squad wasn’t that easy especially after the performance of the girls in the historic win over Australia at the Oceania 7s.

“It’s sad to mention that two of our key players Vani Buleki and Luisa Tisolo were not considered due to serious injuries sustained during the tournament” said Fuli.

Despite the setback, Fuli has put together a formidable side which consists of two Olympians in the final 13, captain Rusila Nagasau and Rejieli Daveua.

Majority of the other players have been a part of the World Rugby Women’s Sevens Series while Sesenieli Donu, Reapi Uluinasau and Laisana Likuceva are the newcomers in the squad.

“We were blessed to play against New Zealand and Australia where I had an opportunity to test my girls’ and see who all can take up the challenge when needed.

We created a very competitive environment for them in-terms of discipline, fitness, understanding of set-pieces and executing the plans against the opponents while on the field” said Fuli.

The women are in Pool B and will come up against Canada, France and Brazil, with competition starting on July 29.

Bach says Brisbane 2032 will be Olympics “for the whole Pacific...