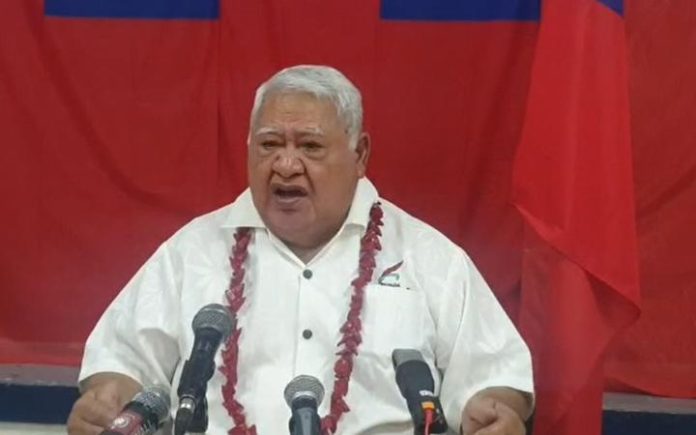 The former prime minister of Samoa has been found guilty of contempt of court after fighting judgments that tried to manage the 2021 election turmoil.

In a decision delivered by the Supreme Court of Samoa on 23 February, New Zealand justices Robert Fisher and Raynor Asher set out how Tuilaepa Sailele Malielegaoi and others “damaged the fabric of Samoa” with the “gravest possible examples of contempt of court”.

Also found guilty of contempt of court were MP Lealailepule Rimoni Aiafi and party lawyer Maiava Visekota Peteru, while six others were acquitted of the same charge.

The judges chose not to impose any penalty, considering the “very special circumstances” of the case.

In April 2021, after the general election resulted in a dead heat between the then-incumbent Human Rights Protection Party (HRPP) led by Malielegaoi, and a new party Fa’atuatua i le Atua Samoa ua Tasi (FAST) Party, the courts were tasked to help break the tie.

But Malielegaoi fought back against several court orders allowing Parliament to sit with FAST as leaders, and even had the new party locked out of the Parliament building the day the newly elected MPs were to be sworn in by court order.

The party, led by Fiame Naomi Mata’afa, the now-prime minister and former deputy to Malielegaoi, was sworn in anyway in an impromptu outdoor ceremony on the steps of the building.

Nearby at the HRPP headquarters, Malielegaoi accused them of “treason” and accused the judiciary of colluding with FAST members.

“They publicly denigrated the Judges and declined to follow their decisions,” the judgment released on Wednesday said.

“By rejecting the Judges, they invited legal anarchy. Many others accepted the invitation. It was a troubling time for Samoa.”

In a hearing in late February, Malielegaoi and other Opposition members formally apologised for scandalising the court.

The respondents acknowledged they had undermined public confidence in the court and apologised for what they had said. The judges welcomed the apologies.

The Opposition members involved and Mata’afa submitted an agreement to the court to discontinue the contempt of court proceedings in order to help the country move forward from the turmoil of 2021, and to “promote peace and harmony for the public of Samoa”.

The court had used this agreement as the basis on which not to impose penalties on the guilty parties, the judgment said.

“Although it is important to publicly record and condemn these contempts of court, we see no need to go further. The precedent now stands,” the judges wrote.

“On this occasion penalties would simply inflame disruptions and conflicts that have done enough harm already. The current prime minister and FAST party are anxious to put them to bed. It is not our place to disagree.” .