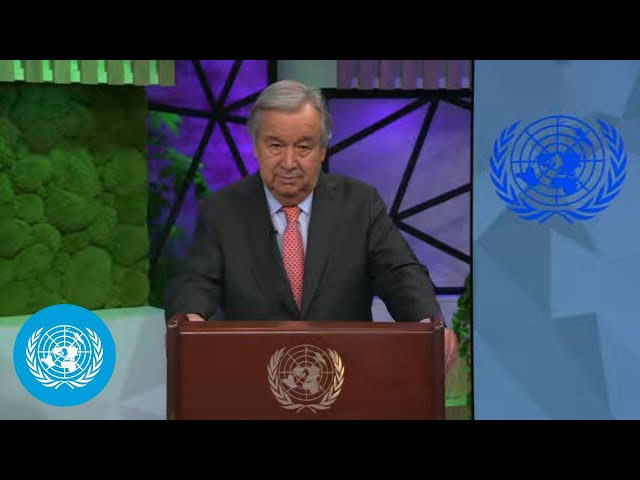 “Early warnings and action save lives,” Secretary-General António Guterres said in a video message during a ceremony marking the day, adding that the World Meteorological Organisation (WMO) would “spearhead new action to ensure every person on Earth is protected by early warning systems within five years.”

The agency will lead the effort and present an action plan in November at this year’s UN climate conference (COP 27) in Egypt.

Spotlighting early warning and early action, he underscored: “We must invest equally in adaptation and resilience.”

“That includes the information that allows us to anticipate storms, heatwaves, floods and droughts.”

The most recent report of the Intergovernmental Panel on Climate Change (IPCC) details the ongoing suffering, as “each increment of global heating” further increases the “frequency and intensity of extreme weather events,” warned Guterres.

He said it was unacceptable that one-third of the world’s people – living mainly in least developed countries (LDCs) and small island developing States (SIDS) – are still not covered by early warning systems.

“In Africa, it is even worse: 60 percent of people lack coverage.”

Climate change has become a more stark reality in all parts of the world, leading to increasingly extreme weather, including intense heatwaves, droughts and forest fires.

“We must boost the power of prediction for everyone and build their capacity to act,” said the Secretary-General.

“On this World Meteorological Day, let us recognise the value of early warnings and early action as critical tools to reduce disaster risk and support climate adaptation.”

Over the past 50 years, a climate or water-related disaster has occurred on average each day – taking the lives 115 people and causing daily losses of US$202 million, according to a 2021 WMO disaster statistics report.

Although the number of recorded disasters has increased by fivefold over that period, improved early warnings and disaster management have saved the lives of many.

“The growing number of disasters due to climate change is endangering implementation of a large number of Sustainable Development Goals (SDGs),” said WMO chief Petteri Taalas.

Noting that increasing investment in climate early warning services and related infrastructure is growing every-more important to climate adaptation, he described it as “one of the highest returns” going, for a modest stake.

“There is a need to invest US$1.5 billion during the coming five years to improve the quality of the services and related infrastructures especially in the LDC and SIDS countries,” he flagged.

An integrated Early Warning System for floods, droughts, heatwaves or storms, alerts people to upcoming hazardous weather and informs governments, communities and individuals, so their impact can be minimised.

In addition to understanding forthcoming storm risks, a comprehensive early warning system must also include lessons learned from past events, to improve future response.

Despite the many benefits outlined in the 2019 UN-backed Global Commission on Adaptation report Adapt Now, including a tenfold return on investment, one in three people globally is still not covered.

It also urged developed countries to significantly scale up their provision of climate finance, technology transfer and capacity-building for adaptation.

In achieving universal coverage of early warning services, WMO will seek to close observation gaps, expand country capacities for issuing warnings while simultaneously improving their ability to respond in a people-centred, inclusive and accessible manner.

The new plan seeks to build on existing WMO activities and partnerships, including with key agencies, countries and groups already active in the field.

This will require inputs from actors throughout the entire early action value chain to close early warning gaps.