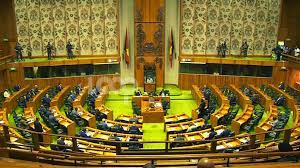 Papua New Guinea Parliament has approved the creation of seven new electorates which will be included in this year’s General Election.

Prime Minister James Marape Tuesday tabled the 2021 Electoral Boundaries Commission (EBC) Reports and Recommendation in parliament, which recommended the creation of 12 new electorates based on population from the 2011 National Census.

“From these 12 electorates, the EBC has consulted with the Electoral Commission (EC).

“The EC indicated that it was not prepared to conduct elections for all the 12 proposed new electorates in the 2022 General Election,” Marape said.

“After further consultation with the EC, the EBC has recommended the seven electorates to be redistributed and elections of each of these electorates be conducted in the 2022 General Election.”

Marape said the commission in June started a review exercise on all provinces with relevant provisions under the Organic Law on Provincial and Local Level Government Elections.

He said the country’s population was estimated at over eight million people, an increase of 300 per cent since the first general election in 1977 when the population was 2.3 million.

Marape said since the 1977 election to the present day, electoral boundaries had not been altered or changed to reflect the growth in population, creating a situation where citizens did not equally benefit from the development of the country.

Previous reviews and recommendations carried out by the EBC took place in 1981, 1986, 1991 and 2006, but all were rejected by the sitting parliaments, he said.

The EBC also recommended that five existing electorates, whose proposed population was expected to significantly increase by 2027, would be split but only take part in general election for that year (2027).
“Elections for the five proposed new electorates of Baniara (Alotau), Motu-Koitabu (Moresby North-West), Baining (Gazelle), Middle Sepik (Angoram), Mendi Central (Imbonggu) and Anglimp (Anglimp South Waghi), will be held from 2027 onwards,” he said.

Marape said Parliament was aware that it could only be done once amendments were made to increase the number of open seats from the present maximum of 120 to an appropriate number.

The total number of seats in parliament, including the seven new electorates, would be 118..