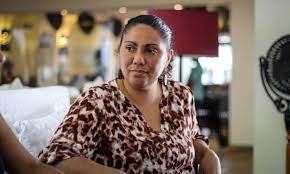 Rain pelts down as the monthly city markets opens its doors in Port Moresby, the capital of Papua New Guinea.

Market sellers worry about the weather chasing potential shoppers away but organiser, Sylvia Pascoe is unfazed. She gets onto social media to encourage her thousands of followers to stave off the rainy day blues by coming to the markets for some hot Papua New Guinea coffee.

Her perseverance and that of the mostly female sellers pays off when the sun creeps back out.

Pascoe, who began the Port Moresby city markets, is passionate about creating opportunities for business owners and entrepreneurs, especially other women.

In June, she will attempt to take her leadership to the highest level by contesting the country’s federal election.

“I’m not the type of person that sees an issue and just walks away from it. I feel like if its in front of me and it needs to be done, I do it,” she said.

Pascoe is one of four women nominated by one of Papua New Guinea’s most influential political figures, Sir Peter Ipatas, to run on the People’s party ticket; a political party he founded in 2006.

The others include media executive Tania Bale, former top government bureaucrat Anne Bais, and business woman and consultant, Michelle Hau’ofa. Each woman will be a candidate in one of the four electorates that make up the Papua New Guinean capital.

The announcement of Ipatas’s support for the women made last month, caused a stir, given how influential Ipatas has been in the backroom machinations that have seen prime ministers rise and fall in PNG.

It was welcomed by many as a positive shift after the results of the 2017 elections, in which no women were voted in, making Papua New Guinea one of just three countries in the world to have no women in its parliament.

“It’s not a a publicity stunt, it’s not a grab for headlines, it is genuinely something he has put a lot of thought and care into,” said Bale.

“It is an incredible opportunity for us and an incredible honour for us to be mentored and come under the wing of governor Sir Peter Ipatas.”

According to United Nation reports, Papua New Guinean women are disadvantaged in many areas of development, including politics; with PNG having had just seven female MPs in its nearly 50 years since independence, something the new People’s party candidates are aware of.

“We haven’t had many women in parliament and currently we’ve had zero which has been a big motivator for us,” said Bale.

“Hopefully, the steps we’ve taken will give fortitude to other women to step forward.”

Sir Peter Ipatas has been in parliament for 25 years since becoming the governor of the Enga province. He is a political enigma always in the centre of power but never putting himself up to be a candidate for prime minister.

In 2006, he founded the People’s party, which has been a major player in the formation of governments, including bringing the current prime minister, James Marape, into power.

Sir Peter Ipatas is revered for being a visionary leader instrumental in reforms in education, health, and infrastructure. In education he is known as the father of the country’s “Free Education” policy, which sees provincial governments pay for student tuition fees.

“We feel that the ladies are capable… or sometimes more capable of representing our people in parliament,” said Sir Peter while endorsing the four female candidates.

The lack of women in PNG’s parliament has revived a debate about whether quotas, reserving seats in parliament for women, should be introduced.

A recent proposal that would have seen five seats – one each in the Highlands, West Papua, East Papua, New Guinea Islands and Momase – reserved for women, was officially shelved last week, when the government announced that quotas would not be introduced in time for this election.

“We could potentially work on getting those changes in the next parliament but certainly not for this one… We invited party leaders to share their views and opinions [about the proposal] but on record, we only heard back from two political parties,” said Julie Bukikun, the assistant resident representative for the United Nations development programme.

For Pasoce, speaking as she surveys the stands at the markets, she is not interested in quotas, but hopes to make her way to parliament nonetheless.

“I vehemently disagree with the reserved seating. I want to earn my place in parliament, fairly. I want the people to vote me in.”.