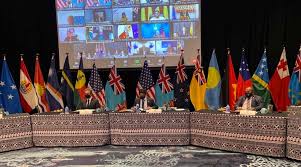 In response to the recent visit to the Pacific by U.S Secretary of State Antony Blinken, and the release of the Indo-Pacific Strategy of the United States, the Pacific Elders’ Voice have the following points to make about regional security in the Pacific:

1.The primary security threat to the Pacific is climate change. This fact is clearly articulated in the Boe Declaration on Regional Security which states: “We affirm that climate change remains the single greatest threat to the livelihoods, security and wellbeing of the peoples of the Pacific and our commitments to progress the implementation of the Paris Agreement.” This was preceded and guided by the Biketawa Declaration on the vulnerability of Pacific Island countries to the threats to their security.

3.We are deeply disturbed by the fact that the U.S representatives at a recent Intergovernmental Panel on Climate Change meeting sought removal of the words “loss and damage” in the Summary for Policy Makers. This appears to underpin an abrogation of responsibility with respect to the impacts of climate change.

5.The nuclearisation of the Pacific is an ongoing concern. Spent nuclear fuel and reprocessed waste continues to be transhipped through our region. There is ongoing pressure to make the Pacific a nuclear waste dumping ground. The growing number of nuclear powered and armed military vessels in our region creates enormous unease among Pacific Island people.

6.We are increasingly concerned about the increased militarisation of the Pacific. The development and enhancement of military bases and other military facilities in our region is a growing concern. Such actions can only create a sense of unease in our region that is not of our own making. We therefore call on all nations to de-escalate the build-up of military activity in the Pacific.

7.The recently released U.S Indo-Pacific Strategy was developed with little, if any, consultation with Pacific Island countries. We also find the combining of Indian Ocean countries with Pacific Island countries problematic and therefore unacceptable. The Pacific Island region (commonly referred to by Pacific islanders as the Moana) has its own set of unique challenges and should not be linked with the Indian Ocean in a blanket, military perspective. We note that the Strategy states that “allies and partners” outside the region are increasingly committing new attention to the Indo-Pacific, particularly the EU and the North Atlantic Treaty Organisation (NATO). Again, we emphasise that this “new attention” to the Pacific has not been developed through full and proper consultation with all Pacific countries. The Strategy further states that the Quad is a premier regional grouping, a notion that we contest. The security and future of the Pacific must be determined primarily by Pacific Island countries and not by external powers competing over strategic interests within our region.

8.The Elders are concerned that there has not been an in-depth analysis of the Indo-Pacific Strategy from within the Pacific region and therefore call on academics and others to undertake a thorough analysis of the Strategy in order that we may be able to better understand how this Strategy plays out in the context of our region and our own concerns about security, particularly in relation to climate change.

9.We are suffering from many insecurities in our region. It is time that the international community focus on these insecurities particularly in the context of climate change. We call on all nations to respect the sovereignty of all Pacific Island countries and the right of Pacific peoples to develop and implement their own security strategies without undue coercion from outsiders. The future security of the Pacific region should be primarily determined by Pacific people.

The Pacific Elders’ Voice is an independent group of Pacific people who have been leaders in the region. Our purpose is to provide guidance and advice that will strengthen Pacific resilience to current and future environmental, security, and human rights threats. We provide constructive policy inputs for current and future challenges and opportunities facing the Pacific.