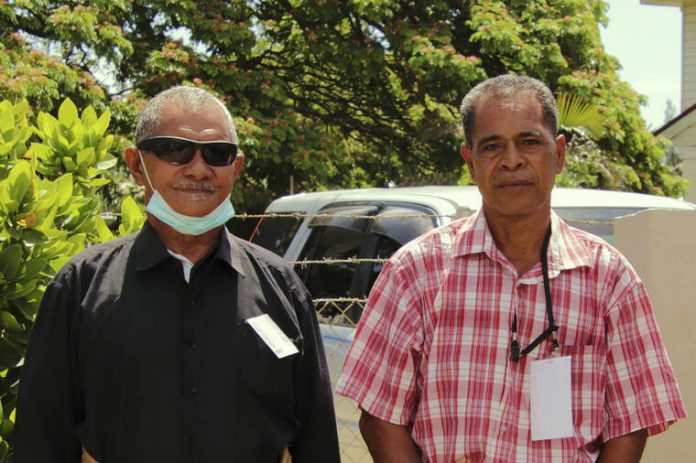 The first two booms from the volcano were scary enough, but the third explosion was immense, sending everyone from the village running from their homes in a reaction that would save all but one of their lives.

Even now, more than five weeks later, the children from Mango Island still often run or cower when they hear a thunderclap or loud noise.

The small island in Tonga was one of the closest places to the 15 January South Pacific volcanic eruption, an event so massive it sent out a sonic boom that could be heard in Alaska and a mushroom plume of ash that was seen in startling images taken from space. On Mango Island, every single home was destroyed by the tsunami that followed.

All 62 survivors were rescued by boat and moved to Tonga’s capital, Nuku’alofa, where they have been living together since in a church hall. Most of that time they’ve been in lockdown after Tonga experienced its first outbreak of the coronavirus.

Two of the survivors described their experiences and uncertain future to The Associated Press in an interview that was translated by an official from the Tonga Red Cross.

Sione Vailea, 52, said Mango Island is the prettiest place he knows and nothing compares to it in all of Tonga. Just 14 families lived on the island, he said, all of them close together in a single village.

Each family owned a small, open-sided boat and each morning the weather was favourable, they would go onto the ocean to catch reef fish, snapper, octopus and lobster.

What they couldn’t eat themselves they would take to the capital to sell, getting enough money to buy food and other necessities. For those fortunate enough to have a decent-sized engine on their boats, it was a six-hour return journey to the capital, but it could take double that time for those puttering along on 15 horsepower.

Mango Island is a little over 20 miles (32 kilometres) from the Hunga Tonga Hunga Ha’apai undersea volcano, which back in late 2014 had rumbled to life, creating a small, new island and briefly disrupting air travel in a series of eruptions.

But those were nothing compared to the scale of eruption that took place on that Saturday evening in January. When the islanders heard the third massive boom, they began running from their low-lying village up a nearby hill, the highest point on Mango Island.

“There was no sign that there was going to be a tsunami, but our gut feeling was we needed to get up to the top, because we weren’t sure what was happening,” Vailea said.

As the island’s appointed town officer, Vailea checked to make sure everybody was gathered. He noticed one family was missing.

Another survivor, 72-year-old Sulaki Kafoika, who goes by the name Halapaini — or talking chief — a title bestowed upon him by Tonga’s king, said that once he got to the top of the hill, he looked back. He could see waves crashing over the tops of their houses. He’d never experienced anything like it in his life.

Vailea scrambled back down the hill and saw the wife, two daughters and son of a 65-year-old man coming up. The man was gone, taken by the waves.

“He was the first victim of the tsunami,” Vailea said. “Because he died right then, as they were trying to get up to the top of the island.”
Two other people elsewhere in Tonga also died from the tsunami, including a British national, and a fourth person died from what authorities described as related trauma. The tsunami crossed the Pacific Ocean to Peru, where it caused an oil spill and two more people drowned.

On Mango Island, night’s darkness quickly followed the tsunami as the villagers remained huddled at the top of the hill. Throughout the night, the men held blankets above the women and children to protect them from the ash and small volcanic rocks that were pelting down. The tsunami had cut off all phone and internet connections, and they were alone and isolated.

When dawn broke, they walked down the hill and found the body of the drowned man. Amid the wreckage, they found a small shovel and an axe. They dug a grave, a process that took much of the day after they hit rock about 1 meter (3 feet) down.

All of their boats were wrecked and they had almost no food. After searching the village, they found two small bags of rice, which they cooked for the children, Vailea said. The adults ate nothing that day, or the next, as they waited.

Finally on Tuesday morning, a boat arrived from a neighbouring island to check on them. Their neighbours had brought with them some cassava, a root vegetable, and a bunch of plantains, which are similar to bananas.

“They cooked it and it was the best meal,” said Vailea. “On a normal day, you wouldn’t call it a good meal. But on that Tuesday, it was very special.”

The next day, they were all transported to the nearby island of Nomuka and then a few days later to Nuku’alofa, the capital, where they have been living since. None of them have been back to Mango Island. Until Sunday, they were in lockdown after the outbreak of the virus, which was likely brought in by foreign military crews delivering vital aid.

The survivors say it has been difficult for them over the past few weeks as they deal with the trauma and the lockdown restrictions, but it has helped immensely that they have all been living together and have been able to comfort one another. They’ve benefited from the clothes, food and money that have been donated by people from around the world.

What happens next remains uncertain. As town officer, Vailea has been meeting regularly with Tongan officials but said the final decision of whether they will be able to return and resettle Mango Island rests with Tonga’s government and the monarch, King Tupou VI. The survivors hope they will get a decision within the coming weeks.

Vailea said the people of Mango Island are split, with some wanting to return and others happy to start life afresh in Nuku’alofa or elsewhere. He said it is his duty to support whatever his people want.

Halapaini said he has mixed feelings. All the good things that he enjoyed in life were on Mango Island, but he also worries that the volcano could erupt again.

Vailea is more emphatic. He wants to return to Mango Island, where life can be hard but where you own your time and share everything with your neighbours. Where you wake up in the morning and jump on your boat to fish.

Fiji records 54 new cases of COVID-19, FEMAT winding down its...

Solomon Islands ready to graduate from LDC by 2024