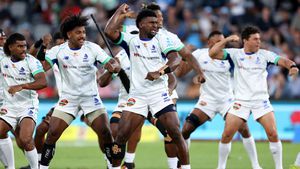 After having their first taste of Super Rugby last weekend, the Fijian Drua are aiming to show they’re quick learners when they meet the formidable ACT Brumbies on Saturday in the second round of Super Rugby Pacific.

The Drua lost 40-10 to the New South Wales Waratahs in their debut match, handing the Waratahs their first win in Super Rugby since August 2020.

While the margin was substantial, Drua head coach Mick Byrne believes his team needs only incremental improvement in key areas to produce more competitive performances against the Australian franchises.

Byrne said after experiencing Super Rugby, his players now have a better understanding of the pace of matches and the importance of keeping errors to a minimum.

The Drua showed in their opening match they are fit and up to the physical challenge of Super Rugby. But they conceded more than 20 turnovers last weekend and that allowed the Waratahs to play mostly on the front foot and dictate the pace of the game.

Byrne said the question of pace was critical. The Drua wanted to play at a high pace in keeping with their traditional style but Byrne suggested they were prevented from doing so by the Waratahs.

“It was interesting … two games against Australian teams (including a pre-season match) and every time a whistle goes for a free kick someone gets the ball and throws it 30 metres away,” Byrne said.

“They’re obviously understanding of and respect us. They know what we can do and teams will try to do things like that.

“It slows the game down, the niggle starts, the pulling of players. They’re not letting us get on with the game and we learned from that. Having faced it now, there’s a lot of things that go on to try and take your mind off the game.”

Byrne said his players have high expectations of themselves in their debut season and are determined to eliminate mistakes as much as possible.

“What we saw was a team that tried really, really hard to get the job done and made some unusual errors early,” he said.

“If we’d held onto the ball we would have been a bit more like the last 20 minutes, threatening. That last 20 is where we can be, so the expectations haven’t really changed.”

The Waratahs belted out their team song to celebrate the win over the Drua which was their first in 13 matches. If there is to be a repeat performance, the ‘Tahs also will have to improve in their derby clash with the Queensland Reds.

“I think we’re keeping it in check,” he said.

“With all due respect to the Drua, it was a win at home against a new team.

“We understand there are much bigger challenges coming.”.