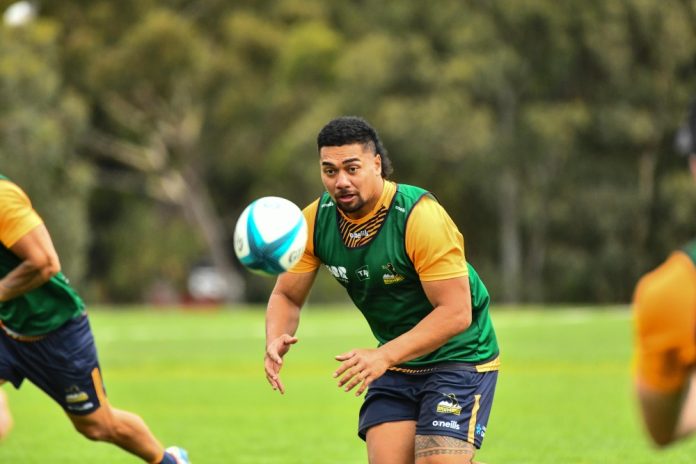 Brumbies centre Chris Feauai-Sautia is overjoyed at the prospect of returning to Super Rugby Pacific.

Feauai-Sautia makes his return from the bench as the Brumbies prepare to take on Fijian Drua at GIO Stadium on Saturday.

The 28-year-old last featured on home soil in September 2020, ironically missing the AU final against the Brumbies due to a groin injury.

A stint with French club Oyonnax was cut short due to COVID, landing him in the nation’s capital and on the cusp of a return to Super Rugby.

“It’s pretty exciting to be back in Super Rugby again,” Feauai-Sautia told reporters.

“I always knew Super Rugby was a really tough comp and I always wanted to come back and challenge myself and I’m happy the Brumbies gave me the chance.

“I was pretty surprised because last week I had a run in the (Brumby) Runners game and I wasn’t thinking of (selection) much this week so when I saw my name, it was exciting and can’t wait to get on the field.

Feauai-Sautia’s career has been hampered by injury, limiting him to just two caps for the Wallabies after breaking onto the scene as a teenager.

It has left Brumbies coach Dan McKellar and the coaching staff to ‘rebuild’ his injured body across the extended pre-season, getting to best out of him from a limited program.

“He had a good hit-out for the (Brumby) Runners last week…he came down here and we had to rebuild him but he’s worked really hard to get his body in good shape,” Brumbies coach Dan McKellar said on Wednesday.

“He’s a powerful runner with ball in hand and on his defensive efforts so we’re excited to get Chris in a Brumbies jersey.

“He’s certainly never going to do a full program in terms of 100% of the program. We take the attitude of we’re better off having him do 100% of 3/4 of the program so we manage him and don’t break him.”

However, after a run with the Brumbies Runners last week, the Brumbies and Feauai-Sautia are convinced the centre can emerge as a key finisher for the side, feeling once again like the 19-year-old that took the Rugby community by storm.

“I’ve had a long journey and pre-season but it’s probably the finest I’ve been since I started my career,” he admitted.

“The physios and doctors around here are real different, they definitely look after you and I’m really grateful for that.”.