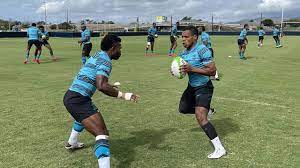 Some of the Olympic rugby gold medal contenders for Tokyo 2020 next month are set to be in action this weekend for the final warmup tournament before the Games at the Oceania Sevens Championships in Townsville.

The tournament at the Queensland Country Bank Stadium will include Fiji, winners of the men’s first Olympic rugby sevens gold medals at Rio 2016, and Australia, the women’s champions from Brazil.

New Zealand, silver medallists in the women’s tournament at Rio 2016, are also taking part in an event that will be the first real opportunity for teams to take part in an international tournament since the coronavirus pandemic.

The Fiji men’s and women’s squads had to spend two weeks in quarantine on the Sunshine Coast, north of Brisbane, before traveling further north in Queensland state to Townsville.

The men’s and women’s teams from the three nations plus an Oceania Barbarians side will each play six matches – two per day from Friday to Sunday (June 27).

Australia is due to open the men’s tournament against Fiji today and New Zealand plays the Barbarians.

The Oceania Barbarians side is comprised of contracted Australian players and members of the Uni Sevens squad.

Each team will face off with the other three teams twice and then whoever is the highest ranked team after all six matches, they will be declared champions.

“Three out of the top four best in the world are playing in this tournament so you really can’t ask for much better preparation than what we’re able to achieve this weekend,” Australia men’s rugby sevens coach Tim Walsh said.

“We’re going a little bit blind [to Tokyo] in terms of we don’t know what everybody else is doing, where they’re at . . . there’s a little bit of intel out there.”

For Australia women’s team the tournament presents a final chance to impress coach John Manenti, who will have the difficult task of selecting a squad of 12 for Tokyo 2020.

A total of seven players from the 2016 gold medal-winning side are in contention for a spot on the plane.

“There’s probably a bit over half the group that have cemented their positions for Tokyo, but there are still positions up for grabs and the girls know that,” Manenti said.

“It’s a great opportunity for us to test ourselves against the best – Fiji were probably the most improved on the world series before COVID and New Zealand have been consistently the best team.”

Australia are the defending men’s champions, having beaten Fiji 22-7 in the final in Suva in 2019, which clinched their place at Tokyo 2020.

Fiji had won four of the previous Championship with New Zealand, surprisingly, never having lifted the title.

The men’s rugby sevens tournament at Tokyo 2020 is set to take place between July 26 and 28.

It will be followed by the women’s event on July 29 and July 31.