The eruption of the Hunga-Tonga-Hunga-Ha’apai volcano in Tonga sent literal shock waves around the world.

It’s understood to have been the most explosive eruption in 30 years and created a larger tsunami than experts thought possible.

Much is still unknown about the eruption, and scientists believe it’s far from over.

But already, it has scientists reviewing the thinking around the impact such a volcanic explosion can cause.

Hunga-Tonga-Hunga-Ha’apai is a very active volcano. Located about 65 kilometres from Tonga’s main island, Tongatapu, Hunga erupted several times in the 20th century, most recently in 2009, and then again in December 2014 and January 2015.

The most recent eruption began on December 20. The explosion could be heard from 170km away, and a large plume was visible from the Tongan capital, Nuku’alofa.

Activity died down in early January but kicked off again on January 13, when a large ash column was sent 17km into the atmosphere.

Professor Shane Cronin, a vulcanologist at the University of Auckland, said the power of the eruption was phenomenal.

“From the explosivity, it’s looking like it was one of the most powerful eruptions over from the last thirty years,” Cronin said.

“On the other side of the coin, it’s actually quite a short-lived eruption that only lasted for less than 10 minutes, so the volume of material and volume of magma was not huge on a global scale.”

In terms of explosiveness, Cronin compared the Hunga-Tonga-Hunga-Ha’apai eruption to the 1991 Mount Pinatubo eruption in the Philippines, and the Krakatoa eruption of 1883.

Cronin said that was based on satellite imagery and reports of where the shock waves and sound waves were felt or heard.

The pressure wave was recorded on barometers as far as 17,000km away in Switzerland, while the sound of the explosion was heard across New Zealand and as far away as Alaska, more than 9,000km away.

Cronin said the volume of the eruption could, and was likely to, increase over the coming days and weeks.

He said it could end up rivalling the volume of the Pinatubo eruption.

An eruption of this scale is to be expected.

Cronin’s own research of the Hunga-Tonga-Hunga-Ha’apai volcano, and of ash deposits on neighbouring islands, shows it has a major eruption every 900 to 1000 years.

” There were two eruptions I can distinctively relate to this volcano,” Cronin said. “One was about 1100AD, and one at about 280AD.

” Those past events were, in total, larger, and involved a series of eruption episodes. So this may not be over yet.”

The eruption caused a significant tsunami that swept through the islands of Tonga.

Niwa hydrodynamics scientist Dr Emily Lane said the tsunami reached up to about two metres high at some Tongan islands.

But she said the force of the tsunami didn’t dissipate as would have been expected.

“These are all thousands of kilometres away from this volcano, so that’s an incredible amount of energy that’s been blown out to cause that.”

According to the Washington Post, a 1.2m tsunami struck Port Saint Luis in California, and a tsunami of just under a metre was recorded in King Cove, Alaska. 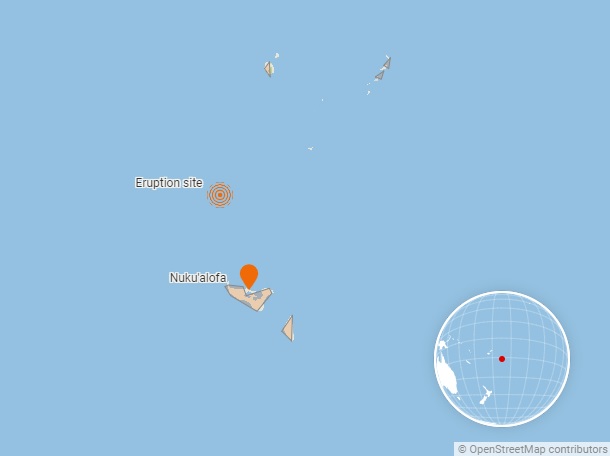 But the tsunami wasn’t just recorded in the Pacific.

Trinidad and Tobago’s weather centre recorded a 12cm tsunami at Mona Island, Puerto Rico, while smaller tsunamis were observed throughout the Caribbean.

What caused the tsunami?

Dr Lane said there may have been multiple factors which led to the tsunami.

“Earthquake tsunamis are pretty straightforward. You get an earthquake, it moves the ground under the sea, which moves the seawater and it radiates out, and the big ones of those are 50km wide by 200km long, so it’s a huge area.

“With volcanoes, it’s a far smaller area, so actually getting out enough energy to get all the way across the Pacific,” she said. “It’s quite flabbergasting, to be honest.”

Hunga-Tonga-Hunga-Ha’apai’s caldera – the chamber which holds magma – is only about 5km across, but Lane said many mechanisms could be at play in causing the tsunami.
The first is a straightforward explosive eruption and a phreatomagmatic eruption. Lane said when magma reacts with the water, it can vaporise the water above it and cause a tsunami.

Tsunami could also be caused by the caldera and the seafloor collapsing.

Images taken by the Sentinel-1 Synthetic Aperture Radar satellites show much of the Hunga Tonga and Hunga Ha’apai islands either side of the caldera have been destroyed by the eruption, suggesting a collapse is possible.

Lane said pyroclastic flows could also create a tsunami, as could the shock wave of the explosion.

“Some of the stuff in the Caribbean was definitely caused by the atmospheric pressure waves because [the tsunami] couldn’t have reached the Caribbean that fast,” Lane said. “So what we’re seeing is probably a combination of a lot of these different mechanisms.”

With further eruptions likely, scientists may not get a clear picture of why such a large tsunami was created.

Based on the previous large eruptions, Cronin said up to 20cm of thick ash could be expected to fall on Tongatapu and the Ha’apai island group.

He said the ash shouldn’t be especially toxic, and won’t be rich in volatile substances like sulphur or fluorine. However, the ash can still cause acid rain and acid leachates, and water will be undrinkable.

Approximately 6 pm Tongan time and now it is dark as midnight in Tonga. 🇹🇴 pic.twitter.com/71dZKKsSJY

Volcanic lightning was also significant in the hours after the eruption and could return if further eruptions take place.

According to the Washington Post, more than 60,000 lightning strikes were detected in 15 minutes following the initial eruption – 70 per second.

Volcanic lightning usually forms in the ash column spewing from a volcano and is unlikely to threaten people, but could impact on communication systems.