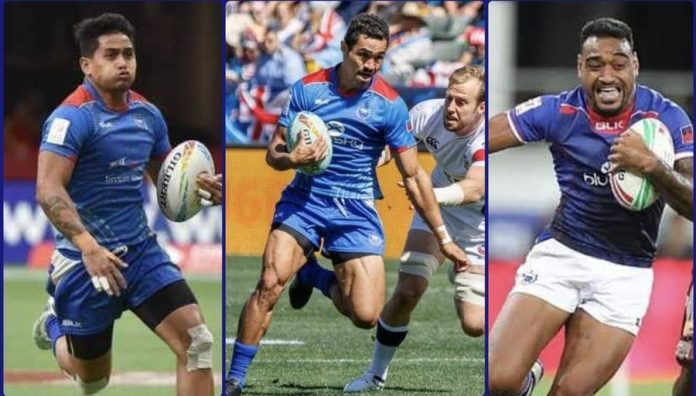 The 7s squad is a mix of youngsters and experienced players, as well as veterans recalled.

Muliagatele has retained key players who have consistently shown finesse in the local Vodafone National 7s competition such as Va’afauese Apelu, Melani Matavao and Paul Scanlan. The veteran trio have played a combined total of 97 matches for the Samoa National 7’s team.

Coach Muliaga has also named exciting young talent for his side. Players such as Indiah Saotui-Huta, Connor Moors, Steve Remoni, Owen Fetu and Mo’omo’o Falaniko all played for the Manu Samoa Under 20’s in 2019. Indiah and Mo’omo’o are now playing their rugby in New Zealand.

Muliagatele has also brought back a few well known experienced faces into the mix, recalling players such Alefosio Tapili who has played 69 games for the Manu Samoa Sevens team, and David Afamasaga who has 126 matches under his belt for the Manu 7s.

The mix of experience, youth and household names from the previous era – will hopefully bring the Manu Samoa Sevens back onto the World Sevens map.

The last time Manu Samoa 7’s won a leg was in Paris in 2016, under head coach Damien McGrath while Muliagatele was Assistant Coach.

Former professional rugby league footballer and NZ international rep Jeffrey Lima has been named Trainer for the Manu 7s. He last played for the Canberra Raiders in the NRL and for the Super League the representative prop previously played for the Wests Tigers, Melbourne Storm, South Sydney Rabitohs, Wigan Warriors and Catalans Dragons. Jeff also had a stint in France’s Elite One Championship for the Saint Gaudens Bears.

Veteran video analyst Harry Junior Narayan who has traveled with Samoa’s National 7s and 15s for over 10 years, will again join the management team.

The Samoa National 7s team will depart Samoa on the 1st of January 2022 for Dubai where they’ll camp until the next HSBC leg in Spain. The Spain tournament replaces the NZ-Australia legs that used to be played in Hamilton and Sydney.

Quarter-final places up for grabs as Rugby World Cup 2021 pool...