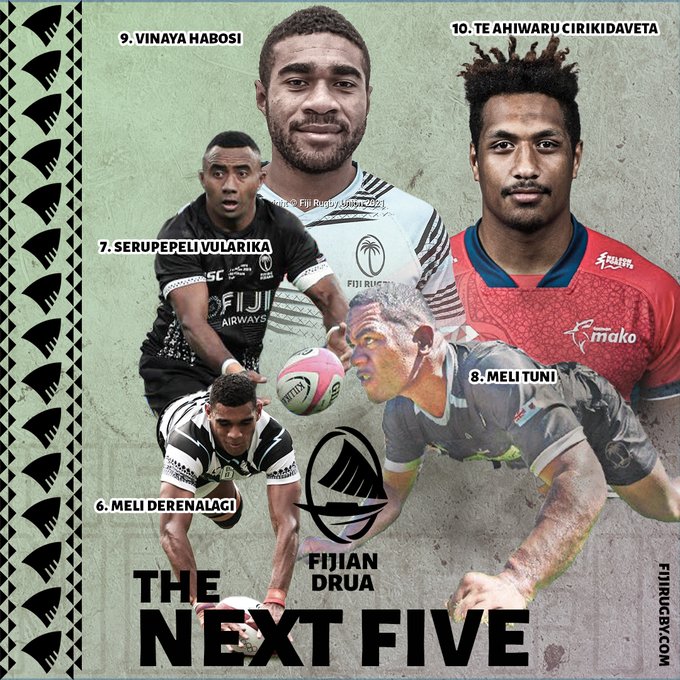 The Fijian Drua today announced a further five players who will join the squad for the club’s debut Super Rugby season.

Fijian Drua Interim CEO Brian Thorburn said: “As today’s announcement shows, the drua is definitely picking up wind. Our foundation squad is taking shape quite nicely, and we hope all our fans and stakeholders are just as excited as we are with the new players announced today.”

Thorburn added: “Ratu Meli Derenalagi needs no introduction as a household name in Fiji, a former 7s captain and an Olympic gold medallist. We have no doubt he will thrive as a Super Rugby loose forward under the guidance of Head Coach Mick Byrne and other coaching staff. Namosi winger Vinaya Habosi and Suva prop Meli Tuni have also been justly rewarded for working their way through our domestic and age-grade competitions.”

He stated: “It’s important to note that the Fijian Drua set-up offers a pathway for players progressing from domestic competition to professional rugby, as well as Fijian players wishing to return home. It is especially great to be able to welcome back a Drua original in Seru Vularika. Alongside him, we also warmly welcome New Zealand-based Te Ahiwaru Cirikidaveta to our vuvale. Cirikidaveta’s inclusion is a nod to his Fijian heritage, and we are both proud and grateful to confirm that he has declared his eligibility for Fiji and the Flying Fijians.”

“At just 23, Ratu Meli’s contribution to Fijian rugby has already been immense. With his speed and ball handling skills, he adds dynamism to the squad as a backrow forward or as a scrum anchor. His aerial skills make him a decent line-out option as well.”

“We are very pleased to have our international utility Seru Vularika back. He has the ability to play halfback, inside centre, wing or fullback. Seru is creative, has a good kicking game, defends aggressively and makes the gain line in any position he plays, offering excellent options to the coaching staff.”

“Young Meli Tuni is 21 years of age but has already been around the blocks – with Suva in the domestic competition, Fiji U-20s and the Fijian Warriors. Likewise, Vinaya Habosi, also just 21, has already been a part of the wider Fijian 7s and Flying Fijians squads. He follows in the fine tradition of talented Fijian wingers who know their way to the tryline. Both Meli and Vinaya have earned their place in the Fijian Drua squad.”

“It is an honour and a remarkable accomplishment for us to have Te Ahiwaru declare his eligibility for the Flying Fijians and join the Fijian Drua for Super Rugby. He is a powerhouse forward, aggressive in both attack and defence, and is just as effective at lock as he is in the backrow. We will benefit from his experience over a number of seasons with Tasman Mako, which includes back-to-back NPC Premiership wins. As a professional coming through an elite New Zealand pathway right from high school, Te Ahiwaru has a lot of offer especially to the younger members in our squad.”

Ten players in the Fijian Drua 2022 Super Rugby Pacific squad have now been announced, and a further 27 expected to be revealed in the coming days and weeks.