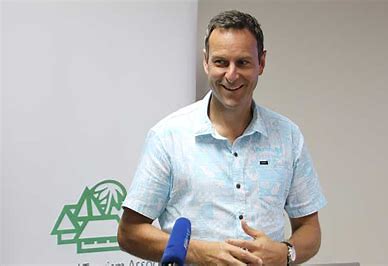 Tourism Fiji says if the booking numbers continue to come through, then the Pacific island nation is well on its way to becoming a billion-dollar industry again.

Tourism Fiji has confirmed 75,000 bookings for hotels and resorts until the end of next month.

Hill said there had been a ‘massive increase’ in hits on the Tourism Fiji website since the Pacific island nation reopened to the world on 1 December.

This included the launch of the industry’s ‘Open for Happiness’ campaign.

“These numbers reflect the marketing and publicity that Tourism Fiji and our industry are doing is having a really strong impact,” Hill said.

“At TF (Tourism Fiji) we are very focused on ROI (survey) for the spend that we put out and it’s fantastic to see the immediate impact.

“The website hits show that people are seeing our marketing and are going onto our web and social pages, looking at the advertising and getting information on Fiji.”

Hill said operators are not only receiving family travellers, but luxury and adventure travellers as well.

He said these tourists are also making bookings in hotels and resorts outside of Fiji’s main island of Viti Levu.

Hill said if these 75,000 people spend an average of around US$1,600, they are looking at close to US$120 million coming into the Fijian economy in just a couple of months.

“We are very hopeful that we will get to that. That’s the hope that we have based on the numbers that we are actually getting now.

“We have seen some resorts do exceptionally well,” Hill said. “Places like the Shangri-la, the Marriott on Momi Bay, Intercontinental, all the Denarau resorts are doing very well.

“But what’s really pleasing is people are travelling and booking into places like Vanua Levu, Taveuni and even some of the places in the Mamanucas,” Hill said.

Fiji Airports acting CEO, Isei Tudreu, said the past two weeks have been very special for workers in the industry as “they have been waiting for 20 months to welcome visitors to Fiji.”

The Fiji Commerce and Employers Federation said business activity is improving and it was reflected in the Reserve Bank of Fiji’s changing their forecast.

The federation’s CEO Kameli Batiweti said over 70,000 visitors booked to travel to Fiji in December was a good thing, as the country could earn around 60 percent of pre-covid times with the economic activity generated from tourism.

Tourism Fiji is also working with local cruise operators to expand the market next year – focusing on the infrastructure and opportunities available.

“A lot of the conversations has been with our existing cruise providers, Captain Cook, South Seas and some of the LiveAboard dive operators.

“So they have a slightly different protocol that the tourist is able to come in, they can either stay overnight in Denarau and join the boat the next day but they have to test negative in order to then get on the boat.

“So they can test inside those 48 hours in order to get onto the boat because obviously, if you wait 48 hours, that boat might be five nautical miles offshore.”

Hill said if somebody were to test positive then they would be stuck in a port or a cabin.

Majority of visitors to Fiji since 01 December arrived from Australia, its biggest market, and the United States while New Zealand’s first commercial flight to Nadi resumed on 6 December.

Tourism operators have been urged to stay the course and drive their businesses well throughout December and January.

The Fiji Hotel and Tourism Association said the Northern Division would open up for tourism in the next few weeks, with resorts around the country expected to gradually open in the months ahead.

The association’s chief executive Fantasha Lockington said there were some initial teething issues, but now the bulk of arrivals are going straight into normal arrangements.

“The biggest day recorded 13,000 arrivals, with 10 turn-around flights and the social media traffic has been up by 20 percent.”

The use of digital wallets by January is expected to ease Covid-19 travel regulations, Tourism Fiji said.

The proposed digitalisation of processes in the hotel and tourism sector aims to do away with the three-day stay at designed resorts and hotels for travellers to Fiji.

Lockington said they are working to fine tune testing mechanisms against Covid-19.

“It’s work in progress, but so far, so good. Fingers crossed, the results will continue to be negative.”

The ‘Open for Happiness’ videos, featuring the Australian star, have been viewed more than five million times – reaching over nine million people around the world, Tourism Fiji said.

But the project has been heavily criticised for its ‘all-white’ team coming together to design the tourism marketing strategy for Fiji.

The video was produced by ad agency Saatchi & Saatchi and tells the story of a white female, played by Wilson, drifting in a raft off the shores of Fiji in search of happiness.

Brent Hill has defended Tourism Fiji’s decision to feature Wilson in the campaign, which was launched to coincide with the reopening of the country’s borders.

Hill, who also hails from Australia, was appointed CEO of Tourism Fiji in August this year.

He said the criticism is well taken, but that the intent was not to paint a ‘white saviour kind of scenario’.

“It’s not about you’re coming here to save Fiji; actually, and if you look at the ads Fiji has saved her. She has discovered and found happiness in Fiji,” Hill told the travel industry site, Skift.

He said Wilson was also selected because she is representative of the tourist who comes to Fiji.

“She’s talking to a largely white, largely affluent, largely burnt out kind of audience in Australia, in the U.S and going you know in a post-Covid world, where actually are we going to find happiness? What is actually really making us happy?,” he said.