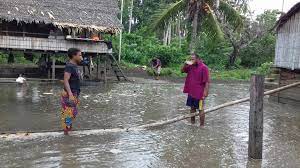 More than 53,000 people in the coastal areas and atolls have been displaced and affected by king tides in Papua New Guinea, the National Disaster Centre says.

The Autonomous Bougainville Government has already allocated K937,200(US$265,871) to provide emergency food and medicine including logistics to the affected areas in the region while further assessment is carried out by National Disaster Centre in parts of the other affected provinces.

A preliminary report from Bougainville showed that at least 3400 people in four communities in the Carteret Islands are severely affected, with their homes, gardens and properties now underwater.

Col Wrakonei said at least 50,000 families and the entire coastal areas and atolls in Manus have been displaced from 12 local level government areas.

“The weather has prevented assessment teams from departing Lorengau.

“There are initial reports of widespread damages to houses, food garden and toilets,” he said.
He said the provincial disaster centre anticipates an immediate need for emergency food, portable water, and tarpaulins for shelter.

In East Sepik, assessment teams on the ground indicated that Walis-Tarawai Island and Murik lake villages were affected.

He said people must take precautions because of the wet season which will continue to next year, with more rains and floods expected.