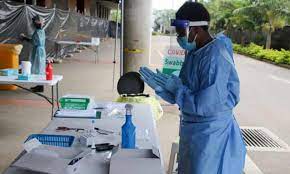 Experts have warned that the next variant of Covid-19 to sweep the world could emerge on Australia’s doorstep, due to incredibly low rates of vaccination rates in Papua New Guinea.

Papua New Guinea is Australia’s closest neighbour, and at its nearest point is just 4km from Australian territory in the Torres Strait. At various points in the pandemic there have been fears that travellers from PNG could bring the virus to Australia.

“I’m worried that PNG is the next place where a new variant emerges,” said Adrian Prouse, head of international humanitarian programs at the Australian Red Cross.

“In PNG less than five percent [of the adult population is vaccinated], in Indonesia, just under one-third. Two countries right on our doorstep with significant challenges in getting vaccines into arms.”

Stefanie Vaccher, an epidemiologist with the Burnet Institute who has been based in PNG since last year, echoed this concern.

Vaccher said the Australian government and people should care about the spread of Covid-19 in PNG not just for what it might mean for Australia.

“I don’t think it should matter which country a variant emerges in for the world to care. Countries have a responsibility to think globally and the pandemic has revealed how interconnected we are … It’s important not just because it’s a potential risk for their populations, who might lose hard-fought grounds, or people have struggled through lockdowns. These are people suffering in any country and their lives are equally as important as anyone else.”

Papua New Guinea has been dealing with a devastating outbreak of Covid-19 throughout 2021.

The official death toll from the virus is 573, with about 35,000 cases, but the true scale of the outbreak is hard to define due to low testing rates and stigma about having the disease. Reports suggest people ask doctors not to put Covid-19 as the cause of death on death certificates of their loved ones.

Vaccher said a study conducted in PNG around March 2021 – before the big wave of the virus – showing that 24 percent of healthcare workers at Port Moresby general hospital already had antibodies to Covid-19 pointed to how widespread and undetected Covid transmission had been.

“Right now PNG is dealing with a surge in Delta,” Prouse said. “When you overlay a surge of Delta with a really fragile healthcare system, high rates of illness, poor rates of access to sanitation, clean water, you see a rise in hospitalisation and death.

“We’ve seen the major hospitals in PNG scale down their medical services. The worrying thing, from a much longer-term perspective, we’re starting to see a rise in issues around malaria, TB, other illnesses, poor maternal health and infant health.”

“Another devastating fact is that maternal mortality has doubled in the last year,” Vaccher said. “Covid would play into that a bit – Covid does affect pregnant women. But it is also due to the fact that hospitals have shut down, doctors and nurses are off work with Covid, people are too afraid to come to the hospital for appointments.”

Prouse said that while vaccine supply to PNG had been adequate, and he praised the Australian government for doing “a really good job on getting vaccines to our Pacific neighbours”, the issues in PNG were about “getting arms to vaccines”, with problems around cold storage, health messaging and especially vaccine hesitancy.

Both experts said Australia’s messaging around AstraZeneca early in the year did not help people in PNG to have confidence in the vaccine’s safety. The Australian government donated tens of thousands of doses of AstraZeneca to PNG, at the same time as it was recommending Australians under 60 not get that vaccine due to the very small risk of blood clots.

“There are serious issues with vaccine hesitancy in PNG – people just not willing to get vaccinated for multitudes of reasons: concerns around the vaccine, concerns around sorcery, concerns around being stigmatised,” Prouse said. “These are issues that are really putting Australia at risk of the next variant being on our doorstep.

“This is not a hand-out-a-pamphlet-and-walk-away situation. You’ve got to win hearts and minds over, you have to convince people [the vaccine] is not something to be feared and it’s actually going to save their life,” he said.

“I think the best thing is the Australian government funding the local organisations who have the reach into communities and trust of communities to go in,” Prouse said.

COVID variants ‘winning the race against vaccines’ warns WHO chief