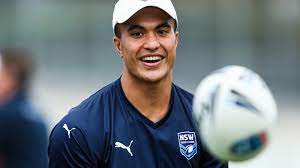 Sydney Roosters youngster Joseph Suaalii has added five kilograms to his frame, plans to resume running with his teammates in the new year following foot surgery and would love the chance to represent Samoa at next year’s World Cup.

Rugby league’s most talked about teenager generated plenty of headlines this year, but hopes to make the next 12 months even bigger.

Suaalii made a low-key cameo at the Emerging Blues camp over the weekend, the same event that he was a late withdrawal from at the start of the year as a dozen TV cameras turned up hoping to catch a glimpse of the teenaged star who had just quit South Sydney for their bitter rivals.

Suaalii is in a battle with Billy Smith for the left centre position, but the more likely scenario is he will fill the right-wing spot vacated by Brett Morris and play outside his mentor Joey Manu.

Suaalii said the first challenge would be fully recovering from surgery on the Lisfranc area of his left foot, going under the knife after suffering an injury which ended his first season in the NRL after just five games.

“I’d say this year has been a year of lessons,” Suaalii told the Herald. “I learned so much about footy and about life.

“I enjoyed every minute playing NRL. It’s a different speed and you quickly find out how easy it is to get caught out at any time and any moment.

“But now I know what the game is like, I have the confidence to go into the pre-season knowing what I want to try and do during the 2022 season.”

Suaalii had three screws inserted into his left foot in July and spent weeks in a moonboot and on crutches. He took the opportunity to leave The King’s School, where he was boarding and completing his Year 12 studies, and returned to the family home at Glenmore Park in western Sydney.

It has been a long recovery and the Roosters are in no rush to get their star recruit back on deck.

“I got the surgery before the lads left for Queensland, and it was actually the first time I had sat down and done nothing for the first time in my life,” Suaalii said.

“I haven’t been able to run yet, except on the treadmill. The club have also taken it slow with me and want to make sure that when I’m back, I am back.

“Hopefully I’m back running [on the field] in the new year. I won’t rush anything.

“I’ve mainly been in the gym with [Luke] Keary and Billy Smith. I’ve added about five kilos and I’m up to around 104kg.

“I just want to feel good and make sure I’m moving well.

“If my foot holds up well and I’ve ticked all the markers, I want to be there round one. If ‘Robbo’ [coach Trent Robinson] wants to put me in later, that’s fine. I won’t be too stressed.

“I’ll play anywhere. There are a couple of spots open and a lot of boys trying to get those spots. I grew up playing most positions in the backline, just nowhere in the forwards.”

The affection for Manu was impossible to miss with Suaalii admitting: “Joey has looked after me ever since I’ve come in. He’s taken me under his wing. I look to him like a big brother. I love learning off him. I love the type of person he is off the field as well. That’s something I want to aspire to as well. He’s a very good man.”