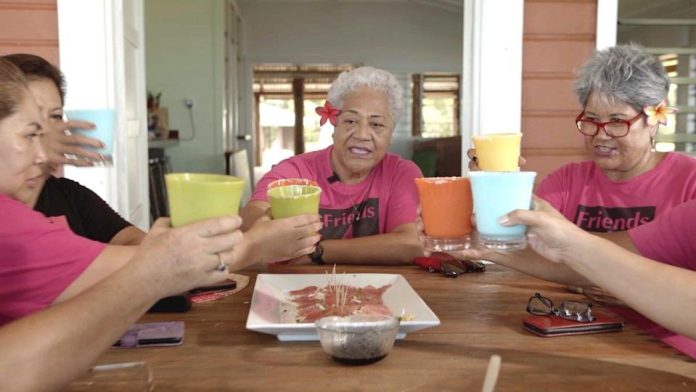 By Megha Mohan and Yousef Eldin

There are fewer women in politics in the Pacific Islands than in any other part of the world, according to UN Women. But this year Samoa elected a woman as its head of government – only the second Pacific Island nation to do so – thanks in part to a network of women friends who supported her every step of the way.

“This is the margarita circle,” the first woman prime minister of Samoa says, raising a salt-rimmed cup. “It’s a place for honest confessions.”

Her friends raise their glasses.

It’s a Sunday afternoon and a group of around 10 have just left the village church to gather for a buffet lunch on the veranda of Fiame Naomi Mata’afa’s family home in Lotofaga village.

Behind them, the clear South Pacific Ocean twinkles just beyond a strip of white sand.

“Do you remember how this particular journey started for us?” asks Tauiliili Alise Stunnenberg, an independent tourism consultant and Fiame’s distant cousin.

“It was just over a year ago,” replies the prime minister, “the day after I resigned”.

As she left office, the most senior woman in Samoa’s government told the media she feared the country was “sliding away from the rule of law”.

The next day she went to a friend’s house for their “Foodie Club” evening – an occasion when a group of girlfriends either visit a restaurant or cook each other a meal.

“As she walked in we started playing the Helen Reddy song, I Am Woman – Hear Me Roar,” recalls Alise. “And we said, ‘It’s time for you to take charge now.’”

“Give me a break, I only just resigned!” was Mata’afa’s reply.

Within nine months she would win enough seats to be declared – eventually – the only woman head of government in the Pacific Islands.

Lotofaga village was home to Naomi Mata’afa’s father, one of Samoa’s senior chiefs and its first prime minister, who shepherded the country towards independence in 1962. Her mother was a member of parliament and later Samoa’s High Commissioner to New Zealand.

Brought up in the capital, Apia, Mata’afa would often visit Lotofaga with her family. Thatched-roof houses lined the coast and people cast their fishing nets by moonlight – which in Fiame’s memory was as bright as daylight.

“It was magical,” she says.

“Now most of that community have moved to higher ground, away from the rising sea level,” she adds. “Most of our villages are based on the coast and more and more [people] are relocating.”

In some Pacific Island countries, sea levels have risen at nearly four times the global average rate, and the region has seen extreme weather events increasing in frequency as a result of climate change.

“We in the Pacific Islands contribute the least to carbon emissions and are the most affected,” Mata’afa says.

At the age of 11, she moved to New Zealand to go to boarding school. She remembers that her parents would still make an effort to come watch her sports days and tease her about her splashy swimming style.

In 1975, when she was 18, her father died and Naomi Mata’afa was granted his chiefly title, Fiame. She was now the leader of her clan, or matai.

“I remember asking her how she felt then, with this sudden weight of responsibility now thrust on her,” says Alise Stunnenberg. Mata’afa replied: ‘It’s always been in me.’”

Sensing that the path her parents had taken in national politics would be her future, Mata’afa moved to Lotofaga village after her return from New Zealand.

“The Faa Samoa (Samoan culture and customs) revolves around the matai framework in rural communities,” says Fiame. “And I wanted to understand those leadership structures and how decisions are reached at local community levels.”

In her spare time, she would sit by the Lotofaga beach shore and speak to the local fishing community – largely led by women – about their concerns.

Often these were to do with “their journey as women, which included the cultural, the biological, the political and economical”, Fiame says.

In 1985 she entered politics, and by 1991 she had become Samoa’s first woman cabinet minister.

Mata’afa and her friends try to see each other a few times a month.

“We do a lot of activities together; salsa, cooking and supporting each other’s work,” says Nynette Sass, a businesswoman and chair of Samoa Women in Sport.

“We all have careers but we’re there for each other. After Mata’afa resigned as deputy prime minister, we were there for her.”

The group rallied round, informally calling themselves Friends 4 Mata’afa.

Over dinners at each other’s houses or drinks in a bar nearby, they discussed Fiame’s political future. It was time to think about the highest elected office in the country, they told her.

In 2021 when Fiame decided to run for Prime Minister with Samoa’s new opposition party Faʻatuatua i le Atua Samoa ua Tasi (Fast), which means Samoa United in Faith, her friends sprang into action.

“It was all a learning curve. We, her friends, are political virgins,” says Alise.

“It was hilarious to watch the reactions as these good-looking and glamorous women, my friends, turned up with me to village council meetings with male chiefs and religious leaders,” says Mata’afa. “The men definitely sat up straighter when they arrived.”

The women organised a series of talanoa – a Pacific Island form of inclusive and open dialogue, where people are encouraged not to hold back.

“We have a rich oratory culture in Samoa where elders and chiefs, who are mostly men, speak to the community, but this was to include everyone, especially younger women and rural women,” Mata’afa said.

The strength of support they heard for the idea of a female prime minister, especially from younger women, was unexpected and encouraging.

A single independent candidate then sided with Fast, but the election commission noted that only 9.8 percent of MPs were women, fractionally below the obligatory quota of 10%, and appointed an additional female MP – from the HRPP party.

Then things got chaotic. After the Supreme Court ruled in Fast’s favour, Fiame went to parliament to be sworn in, and found that the HRPP had locked her out. The ceremony went ahead in a tent outside, but Fiame’s rivals argued it was illegal.

As further court cases took place, Samoans asked Siri and Alexa who their prime minister was, and posted videos of the answers on social media; even the voice assistants refused to be drawn into the political crisis, naming both candidates.

The impasse came to an end only on 23 July when Samoa’s court of appeal ruled that Fiame was the legitimate leader, and that the creation of an extra MP had been unconstitutional.

Congratulations to Mata’afa from New Zealand’s Jacinda Ardern and Australia’s Scott Morrison followed, and the man who had been Samoa’s prime minister since 1998, Tuila’epa Sa’ilele Malielegaoi, finally conceded.

Independent Samoan journalist Lagipoiva Cherelle Jackson says that Mata’afa appeared calm throughout the constitutional crisis, not resorting to attacking her opponent in the media.

“It was almost as if she was unbothered by the frivolity of the opponents’ grasp for power.”

“Samoa is a family,” Mata’afa told the BBC at the time. “I’m not worried. I know it will be OK and we will work out a way peacefully.”

The Pacific Islands have the lowest representation of women in politics in the world. Just six percent of MPs are women, on average, and three countries – Papua New Guinea, Vanuatu and Micronesia – have no women in parliament at all.

Mata’afa is only the region’s second elected woman leader, behind Hilda Heine, president of the Marshall Islands from 2016 to 2020. This, say political watchers, comes with intense and often unkind scrutiny.

Journalist Lagipoiva Cherelle Jackson says that there was a deluge of “vile and ugly gendered online trolling” on social media, which seemed to focus on her status as an unmarried woman.

“People questioned her sexuality and leaders made veiled remarks about her marital status and the fact she does not have children,” she says, adding that she never saw her opponent trolled in this way when he was in power.

Mata’afa says she doesn’t dwell much on it.

“Hopefully they’ll move away from asking those kinds of silly questions,” she says.

But there were legitimate questions too, about the kind of leader Mata’afa will be for women.

She has, for example, appointed a man to serve as minister for women.

When challenged, Mata’afa replies: “I don’t necessarily have a problem with men being ministers for women’s issues – in fact, I think I’m the only woman who has ever served as a Minister for Women in Samoa, we have so many more men in politics – as long as they’re able to recognise the policy needs.”

Samoa is in 97th place on the UN’s gender equality index, and gender-based violence is a major area of concern. Although 46 percent of women in Samoa report physical or sexual intimate partner violence at least once in their lives, according to UN Women, the country only has one women’s shelter.

Does this mean that violence against women is not a priority for this government?

“We have to work out strategies by which we can work in partnership with our village councils and our NGOs to begin to really address those issues, because the government does not have the resources.

These days Fiame has less time to cook for her friends but she does do the washing up, they say. When they meet, conversation often turns to women’s issues.

“Take my mother’s village,” says architect Lauano Lauina Grace, one of Mata’afa’s closest friends, “women are not allowed to take a matai title so there isn’t a voice.”

In Samoa, only a matai – a family or clan leader – can be elected to parliament.

“We have to take a step outside our comfort zone and think what we can do to hear that voice,” Lauina says.

Alise Stunnenberg agrees. “It may be time for us to start looking at what we can do to help improve the status and livelihoods of women in our country,” she says.

It’s thought that the government may be planning to launch initiatives in 2022.

There are more big battles ahead for Fiame, including ongoing advocacy for global funding to tackle climate change and reviving Samoa’s economy, which has taken a brutal hit as the country (which has remained Covid-free) closed its border as soon as the pandemic was declared.

The “gals”, as Mata’afa calls them, will continue to be a big help.

“They aren’t my shadow cabinet, but I value their opinion on issues,” she says.