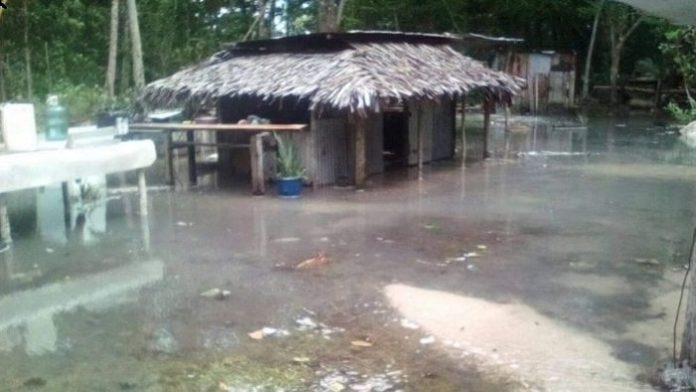 The rise in sea level and king tides now affecting more than 30,000 lives on coastal Manus will continue through 2022, according to the Manus Province disaster office.

The king tides started on 03 December, 2021, destroying thousands of homes on Manus Island and is expected to continue through to January.

Most coastal areas and smaller atolls from Mokerang on Los Negro’s Island to the western end island of Bipi are underwater as of yesterday during an unusual rise in sea level, with crashing waves battering the coastal communities.

The islands of Rambutso and Pak reported damage.

Also, south of Wewak, an island community in East Sepik is working on building a seawall to prevent high tides from destroying their food gardens, houses and water sources, according to a local and spokesperson.

Fredrica Popoitai said since Saturday, Walis Island had seen a rise in the sea level that has seen houses closer to the shore now in the water.

She said the high tide had forced the villagers to start building a seawall to save their food gardens, drinking water sources and houses from being destroyed by the high tides.

“Our village people are organising themselves and working on building a strong seawall. Work has started,” Poipoitai said.

Further across the New Guinea islands, New Irelanders are also experiencing effects of the king tide and houses in the coastal villages have been severely affected.

No casualties and official reports have been received.

And Bougainville has also reported effects of the king tide on the island – on Buka and other islands.

Pictures posted on social media reveal that the only road between Lorengau and Momote Airport has also been affected, but is accessible.

The five kilometre road between Loniu Bridge and Lolak village is at or below sea level and any further rise in the sea level will make it impassable for motorists.

On the Manus mainland, Liap and Tulu are also affected.

The township of Lorengau was not spared from rising waters that swept anything in its path.

Bigger islands of Lou and Baluan were affected as well but withstood the high seas due to their rocky shoreline.

The remote western islands of Wuvulu, Aua and the Ninigo islands will also face the same fate but are so isolated from confirming any damage.

Government authorities will be visiting these islands to do assessments of the damage.

The 2008 king tide has revealed the need for these islanders to resettle on the mainland.

One observer said: “The National Government must acquire land on the main Manus island on higher grounds and settle these people.”

The National Disaster Office said they have been made aware of the issues of the rise in sea level on Manus and other outer lying islands, and will have a report at a later date.

The provincial disaster office said they were compiling a report and will release soon.