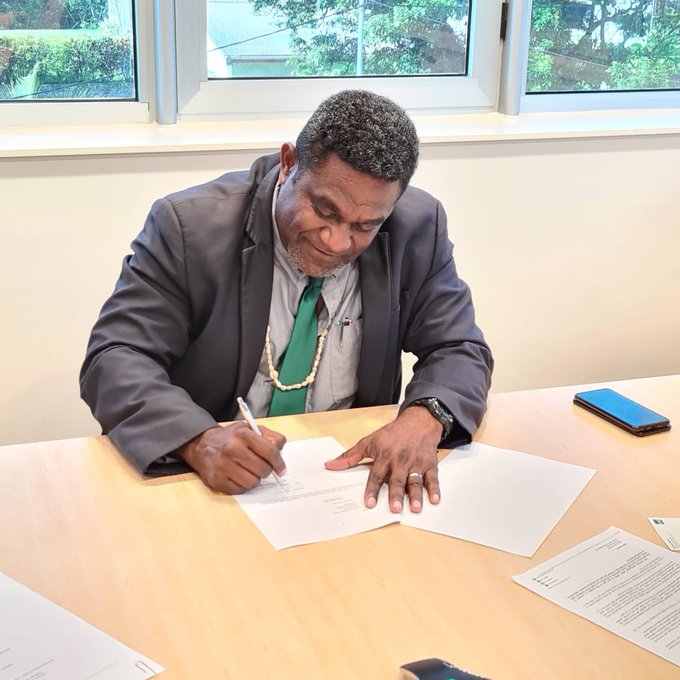 The Asian Development Bank (ADB) will provide a US$6 million grant and the Government of Vanuatu US$1.2 million to establish a network to deliver renewable energy to the people of Malekula and Espiritu Santo islands.

The additional funding, signed today by Vanuatu Minister of Finance and Economic Management Johnny Koanapo Rasou and ADB Vanuatu Pacific Country Office Unit Head and Senior Infrastructure Specialist David Fay, will be used to upgrade power distribution networks from a single wire to a three-phase system. This will prevent the need for future upgrades when demand increases and will deliver safer power due to an improved fault detection mechanism.

The project began in 2017 with US$15.1 funding from ADB, the Strategic Climate Fund, and the Government of Vanuatu.

“The delivery of sustainable, affordable power provides exciting opportunities to improve the lives of people in these communities,” said Fay. “The upgrade will accommodate the demand of larger commercial and industrial facilities on the main grid and provide greater renewable electricity penetration to contribute to the economic development of Vanuatu.”

“This project will allow us to produce clean, reliable, low-cost power to more people, many of whom do not presently have access to the main grid. The government wants to see the shift from polluting energy sources to clean, locally produced renewable energy which again contributes to keeping our air and water clean. New renewable systems will also contribute to our economy by creating good jobs and new careers,” said Koanapo.

The construction of 79 kilometers of new distribution lines will allow cheaper power to reach 1,050 new households, increasing grid access in Espiritu Santo from 22 percent to 29 percent and in Malekula from eight percent to 14 percent

The Brenwe hydropower plant, which is also part of the project, is on track for commissioning in April 2022. Once operational, it will deliver up to 90 percent of the Malekula grid’s needs, saving more than 200,000 litres of diesel per year and reducing Vanuatu’s dependence on imported fossil fuel.