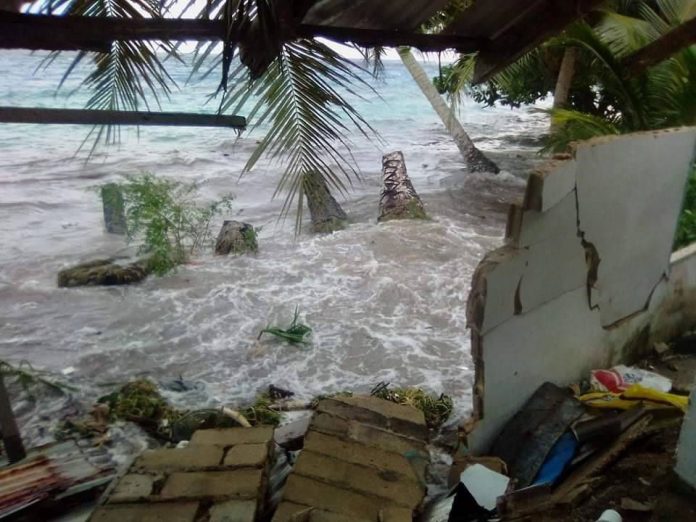 Low-lying islands in the Federated States of Micronesia (FSM) are experiencing massive flooding that threaten the communities across the nation.

“We are watching what’s happening,” FSM President David Panuelo said in a statement, “And, first and foremost, I would ask our citizens to feel assured that their government is aware of what’s happening and is ready to take action.”

The FSM government said it has learned of the extensive saltwater inundation through the social media. “The government has received numerous requests from citizens asking for support,” according to a statement from the FSM Information Service.

“We stand by to offer our full support to the state governments when the requests come in,” Panuelo said.

Richard Clark, spokesperson for the FSM government, said the flooding was caused by King Tides, “which can be made worse by swells.”

Panuelo said the national government has been communicating with state officials in Chuuk, Kosrae, Yap and Pohnpei to assess the damage caused by the storm surges in their respective communities.

“Citizens affected by the ongoing flooding activity are encouraged to document the event extensively, both with photographs and in writing,” the FSM government said. “Cataloguing the damage and the effects as they occur will assist the state and national government assessments following the event and expedite the issuance of necessary assistance.”

Clark said no there are no current evacuation plans.

“The state governments did not describe any evacuations occurring and we are not aware of any, but I am aware of multiple families moving from the shore to schools and other bigger buildings, at least temporarily. I am aware of the President discussing the situation with several members of Congress (informally via phone and messenger),” he said.

The national government said relief efforts will be provided to affected communities.

“Whether it’s construction supplies or food, we will never abandon our citizens to the existential threat of climate change,” Panuelo said.