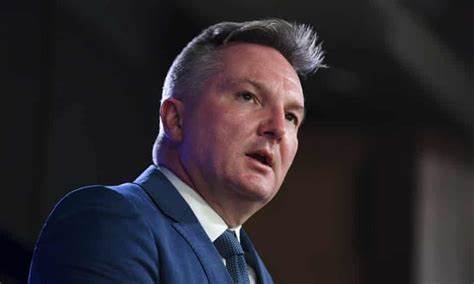 The Australian opposition has attempted to blunt a Coalition scare campaign by ruling out negotiating a stronger emissions reduction target if next year’s election results in a hung parliament.

The senior Labour frontbencher Chris Bowen said his party had “paid a big price” in the “climate wars” over the past decade, and a central task of an incoming Albanese government would be to end the “destructive” politics on the issue.

Labour’s climate and energy spokesperson said the party was pledging to cut emissions by 43 percent by 2030 as that was “what’s achievable coming to office in 2022” – compared with the Coalition’s Abbott-era target of a 26 percent to 28 percent cut on 2005 levels.

With the prime minister, Scott Morrison, attempting to portray the Labour promise as just an “opening bid” for post-election talks with the Greens, Bowen explicitly ruled out such changes.

Asked if the 43 percent target was negotiable, to secure support in either the lower house or the Senate, Bowen replied: “No.”

Several studies have suggested Australia should be making at least a 50 percent reduction this decade, and almost certainly substantially more, to play its part in tackling the crisis.

“Of course, we are driven by science, but we’re also driven by what’s achievable coming to office in 2022 for a 2030 target,” Bowen told the National Press Club in Canberra on Monday.

Analysis shows despite a range of countries’ upgraded emissions reduction pledges in Glasgow, the world remains on track to overshoot the goal of pursuing efforts to limit global heating to 1.5C above pre-industrial levels.

Pressed on whether Labour would be prepared to contemplate a higher target down the track, in response to international momentum for even stronger action, Bowen declared that the newly announced policy was “what we’ll implement and legislate.”

Avoiding specific future commitments, he said a Labour government would then set a subsequent 2035 target “at an appropriate time”.

Leaders of Pacific Island countries view climate change as an existential threat and have urged the Australian government to take far stronger action by 2030, including curbing coal.

The Australian foreign minister, Marise Payne, told Guardian Australia during a visit to Palau on Friday that Australia’s target of achieving net zero by 2050 was “ambitious” and acknowledged the issue was “of great importance to the Pacific”.

Although the Australian government has not formally upgraded its Abbott-era 2030 target, Payne pointed to the projection that it may achieve up to a 35 percent cut in emissions by 2030. She also said she wanted to share low-emissions technology with the region.

Asked whether the watering down of the language in the final Glasgow communique was a monumental failure and a blow to the Pacific, Payne said Cop meetings were “always challenging.”

“Nobody gets everything that they want,” Payne said.

“But I think the presence of the Pacific countries – and I know it is no small thing to travel from Palau to Glasgow in the middle of a global pandemic – the presence of Palau and other Pacific nations were extremely important to, I guess, act as a very clear marker to the rest of the world of what the Pacific regards as important.”

Morrison attempted unsuccessfully to boost Australia’s 2030 target in the lead-up to November’s Cop26 summit in Glasgow, but that idea was vetoed by the National party.

With the Australian federal election due by May, the prime minister has attempted to characterise the Labour plan as a threat to jobs and “unsafe.”

Morrison campaigned on Monday alongside Liberal MP Dave Sharma, who has been pushing for the Coalition to upgrade its medium-term targets and who is facing a challenge from climate-focused independent candidate Allegra Spender.

The prime minister said the 43 percent target was “just the opening bid from Labour”.

“I mean, for Labour to legislate if they were to form government, they would have to do that with the support of the Greens,” Morrison said as he launched a pro-recycling campaign.

“And you know what the Greens’ target is, it’s 75 percent. So, vote Labour, you vote Greens, and you vote for the Greens targets.”

Bowen said the Coalition’s first instinct in responding to Labour’s climate policy on Friday was to promote division “as it is in their political interests to keep the climate wars going.”

He said on Monday it was time for Australia to turn the page on the “toxic climate politics of the last decade” and to embrace the opportunity to become “a renewable energy superpower.”

“The Australian people, fatigued from the last decade, the last two years in particular of the climate wars, deserve so much more than this,” he said.

“They deserve a government with concrete plans and an intention to unite Australians – not divide them – on this most important journey.”

Bowen said Labour was seeking an electoral mandate for its approach to climate change as a “first step to building the national unity.”

He said he wanted to be “very clear” that there would be “no coal-fired power station closures as a result of Labour policy” – while noting some closures had already been announced and it was ultimately for the market to determine.

Decisions about the future of Australia’s coal and gas exports would be “made in the boardrooms in Tokyo, Beijing, New York, New Delhi, London” rather than in the Australian cabinet room.

Bowen said there would be pressure on Australian exports as a result of the world decarbonising, and it was important to support affected communities, invest in job diversification “so that young people coming into the job market … have choices”.

When asked about gas in the Northern Territory’s Beetaloo basin, Bowen said Labour had “supported the exploration, which I think is an appropriate thing to do” – but whether that gas was exploited was primarily a matter for the NT government.

The leader of the Greens, Adam Bandt, said on Monday: “With Labour matching the Liberals on more coal and gas, it’s clear the only way we’ll get climate action is by kicking the Liberals out and putting Greens in balance of power to push the next government to listen to the science.” .