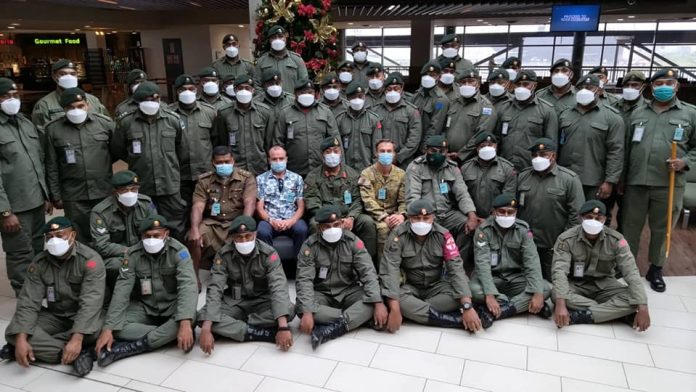 Today, a contingent of 50 Republic of Fiji Military Forces(RFMF) personnel depart Fiji to assist in the restoration of security and stability in the Solomon Islands.

This after Prime Minister Voreqe Bainimarama assured his Solomon Islands counterpart of our support should they need our assistance. The request was accepted and the troops were prepared.

Commander RFMF Major General Jone Kalouniwai in his farewell speech to the troops at the Queen Elizabeth Barrack’s said, “We are here, heeding the call of our nation through the Prime Minister after his discussion with the Solomon Islands Prime Minister to assist our fellow Melanesian family in the Solomons.”

“We are all placing our trust on you that you will go out there and perform to the best of your ability to help bring peace and stability in the Solomons,” said the Commander.

In reciprocating the words of the Commander RFMF, Contingent Commander Lieutenant Colonel Asaeli Toanikeve thanked the RFMF leadership for their trust in him to lead the group and assist in the rebuilding of the Solomon Islands.

“I would also like to assure you that we will bravely stand and heed the call of the military and the nation for we believe this is God calling on our lives to assist the people of the Solomon Islands in their time of need.” Lt- Col Toanikeve said.

Assigned to prepare the contingent, the Commanding Officer 3rd Battalion Fiji Infantry Regiment Lieutenant Colonel (Lt Col) Penioni Naliva said the troops have been briefed about the situation and what to expect.

“More importantly, they are there to assist law enforcement agencies in the Solomon Islands bring back peace and stability to their country.” Lt-Col Naliva said.

Lt Col Naliva added that the deploying contingent which is made up of men from all units of the RFMF will be specifically tasked with ensuring a stable environment for future operations should there be a need to deploy more troops.

Just four years into his military career and going on his first deployment, Legal Officer Captain Aisea Paka said he was excited when it was conveyed to him that he was going on this tour.

“I had a feeling that the time would come for it. However, mindful of the work we are to partake in there is a lot of legal matters to deal with apart from operations, but I want to thank the leadership for this opportunity.” said the Rotuman native.

Akanisi Vakanawa spouse of a deploying soldier said while the news of the sudden deployment came as a surprise it was something she had always expected.

Almost 80 years after Fiji troops first landed in the Solomons and 15 years since their last deployment with the Australian-led Regional Assistance Mission to the Island, the Fijian troops will once again revisit the footsteps of their forebearers.

Meanwhile, the Contingent Commander (CONTICO) for the RFMF Detachment to the Solomon Islands Major Asaeli Toanikeve was promoted to the rank of Lieutenant Colonel during a farewell church service last night in Queen Elizabeth Barracks, Suva.

Lt Col Toanikeve has served more than 20 years in the RFMF. Being a product of the the Royal Military Academy Sandhurst, he has served in various capacities and in numerous appointments both locally and abroad.

Holding the appointment of Chief Staff Officer (CSO) Land Forces Operations, Lt Col Toanikeve was instrumental in the deployment of RFMF personnel in support of the Ministry of Health & Medical Services in the whole of government approach to COVID 19 responce. In addition to that he was also part of the Incident Management Team during the height of the pandemic.

Lt Col Toanikeve is a graduate of the New Zealand Staff & Command College and holds a Post Graduate Diploma in International Security from Massey University..