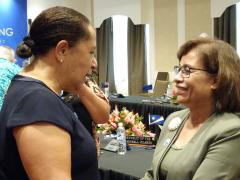 In a significant intervention, former Pacific Island presidents, prime ministers and senior officials have written to French President Emmanuel Macron, urging him to delay the next referendum on self-determination in New Caledonia, scheduled to be held on 12 December.

Grouped as Pacific Elders Voice, the leading Pacific politicians have called on the French President “to respect the wishes of indigenous leaders in New Caledonia, who have called for the deferral of the third independence referendum due to a spike in Covid-related death.”

Independence leaders in New Caledonia have argued for months that the referendum should not proceed because of a recent surge of Covid-19, with more than 11,300 cases and 270 deaths since early September.

While the peak of the current wave of infections has passed, the recent lockdown and declaration of a state of emergency has disrupted campaigning for the crucial decision on New Caledonia’s political status – the third poll under the 1998 framework agreement known as the Noumea Accord.

The call to delay the poll until after the 2022 French presidential and legislative elections has won support from neighbouring Melanesian nations.

This week, Prime Minister Bob Loughman told Vanuatu’s national Parliament in Port Vila that his government formally supported the Kanak demand for a delay in the referendum. Earlier this month, in a meeting with New Caledonia President Louis Mapou, Prime Minister Loughman conveyed Vanuatu’s support for “fair and transparent conduct, even if this means a deferral to September 2022 due to ongoing Covid complications.”

Expressing concern that New Caledonia’s referendum would proceed as scheduled, the MSG statement noted: “We are deeply concerned, like many New Caledonians, that the prevailing circumstances of the Covid-19 pandemic in New Caledonia…does not present a conducive environment for a fair, just, credible, transparent and peaceful conduct of the self-determination referendum.”

Concern across the Pacific

In their letter submitted through the French Embassy, the Pacific Elders urge President Macron “to be open to the voice of the leaders of the Kanak people and show consideration and respect for their wishes. We urge this so that the situation does not turn to violence and the dialogue remains open.”

“We understand that the proposed referendum under the Noumea Accord, scheduled for 12 December, is not supported by the indigenous people of New Caledonia,” the letter reads. “We are aware of their concerns, as we across the Pacific – in Micronesia, Polynesia and Melanesia – have faced tragedy with the deaths of our peoples, greater isolation as well is the economic downturn of our economies. We acknowledge and understand the concerns of our brothers and sisters in New Caledonia and their wishes to defer the third referendum until all mourning protocols had been adhered to at time of death burial, and throughout our traditional mourning period times.”

Despite growing concern in neighbouring Pacific island nations, France’s High Commissioner to New Caledonia Patrice Faure has confirmed that New Caledonia’s referendum on self-determination will proceed as scheduled on 12 December.

This decision has angered a range of pro-independence political forces, with the Party of Kanak Liberation (Palika) describing the announcement as a “political provocation” and “akin to a declaration of war.”

Despite political differences within the Kanak nationalist movement, there is a rare unanimity from a range of organisations calling for the deferral of the vote, including the four parties in the FLNKS, the Mouvement Nationaliste pour la Souveraineté de Kanaky (MNSK), the pro-independence trade union confederation Union Syndicale des Travailleurs Kanak et Exploités (USTKE) and the Kanak Customary Senate (an advisory body of indigenous chiefs to the national Congress and government).

In contrast, the French government’s unilateral decision to proceed with the poll is supported by major anti-independence parties, which are grouped as Les Voix du Non (The Voices of No). This conservative alliance is continuing to mobilise voters, urging New Caledonians to vote in favour of remaining within the French Republic.

Although most independence supporters, Kanak and non-Kanak, are likely to follow the FLNKS call for “non-participation” on 12 December, the vote will go ahead, with French officials stressing that voting is not compulsory and democratic norms must be followed.

This week in Noumea, Francis Lamy, head of the Control Commission responsible for supervision of the referendum, said: “The judicial case law is extremely clear. A low turnout is not a sign that the ballot is irregular. I remind you that voting is not compulsory in France and that there is no minimum turnout required for this referendum.”

This narrow legalism ignores the fundamental political point that low turnout by indigenous Kanak will discredit a referendum that is supposed to be the culmination of a decolonisation process! The two previous polls have been marked by very high turnout (81% in November 2018 and 85.6% in October 2020), so the absence of thousands of pro-independence voters will be a blow to the credibility of the outcome – especially as non-participation will likely be highest in Kanak-majority areas in the Northern Province and outlying Loyalty Islands.

In their statement to the United Nations, the Melanesian Spearhead Group has already warned that “the integrity and credibility of the referendum process and its outcome are seriously at stake.”

MSG countries Fiji and Papua New Guinea both serve as members of the UN Special Committee on Decolonisation, suggesting France will face an uphill battle persuading the international community that this referendum is free and fair. Pacific diplomats will no doubt raise concern that a poll without participation by many indigenous voters fails to address the “innate and active right to self-determination” for the colonised Kanak people, a right at the heart of the decolonisation process in the French dependency.

Regardless of the outcome on 12 December, France’s Overseas Minister Sebastien Lecornu has said that the transition to new governing arrangements must be complete by 30 June 2023. The French government proposes replacing the 1998 Noumea Accord, which has devolved many powers to its Pacific dependency and restricted voting for local political institutions to indigenous Kanak and long-term New Caledonian citizens.

Some local leaders are now worried that, after next April’s presidential elections in France, the French government may seek to unilaterally reform the law that introduced the Accord into the French constitution, rendering unconstitutional the many gains the indigenous Kanak people have made over the past twenty years.