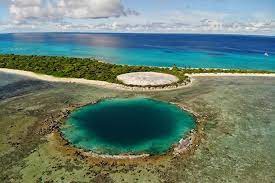 For months, U.S refusal to accept responsibility for a leaking dome of radioactive waste in the Marshall Islands has complicated negotiations with the Marshallese government on an international compact viewed as crucial for blunting Chinese influence in the central Pacific.

On Thursday, members of a congressional oversight committee scolded representatives of the Biden administration for not making more progress on negotiations and taking the Marshallese position more seriously. During the hearing, administration officials offered conflicting statements on U.S obligations to the Marshall Islands, making it unclear where the White House stands on America’s history in the region. In addition, the U.S State Department declined to participate.

“The point of the hearing today was to examine why the United States is not willing to discuss the nuclear legacy with the Marshallese,” said Rep. Katie Porter (D-Irvine), who along with a bipartisan panel of lawmakers stressed the critical role the Republic of the Marshall Islands plays in U.S national security and safety.

Porter, who heads the Natural Resources Subcommittee on Oversight and Investigations, said negotiations will be difficult “unless we act on the moral and national security imperative that we have to address the nuclear legacy.”

The hearing was timed for the 35th anniversary of the signing of the agreement between the two nations, which is set to expire in 2023. It also comes as China develops friendly relations with nations of the central and South Pacific, part of a broader strategy to stem U.S. influence off its shores and worldwide.

The Marshall Islands’ Kwajalein Atoll is home to the Ronald Reagan Ballistic Missile Defence Test Site — where the U.S tests its long- and mid-range missile defense system. Its location halfway across the Pacific allows the U.S military to monitor hostile foreign forces, and it is also an important hub for the American space program.

Realising its leverage, the Marshallese government is increasingly pressing U.S officials to take ownership for cleaning up Runit Dome. The leaking nuclear repository holds 3.1 million cubic feet of radioactive waste, a byproduct of U.S weapons testing during the Cold War, and a focus of a Times investigation in 2019.

For decades, the U.S government has deflected. Instead, it insists the Marshall Islands is solely responsible for the waste site, even though Congress has required the Department of Energy, with funding from the Department of the Interior, to monitor it indefinitely.

In his testimony, Matthew Moury, the Department of Energy’s associate undersecretary for environment, health, safety and security, stated that although his department intends to carry out promised testing near the site, the people of the Marshall Islands “bear full responsibility for maintaining and monitoring Runit Dome.”

Porter asked Nikolao Pula, director of the Office of Insular Affairs for the Department of the Interior, whether he agreed with that statement.

“Nope. I don’t,” he said, noting what he saw as a difference between the Marshall Islands’ ownership of the site and the United States’ responsibility to monitor and maintain the waste pit.

Between 1946 and 1958, the United States detonated 67 nuclear bombs on, in and above the Marshall Islands — vaporising whole islands, carving craters into its shallow lagoons and exiling hundreds of people from their homes.

During the late 1970s, U.S soldiers removed contaminated topsoil and debris from the islands of Enewetak Atoll, where 43 of the devices were detonated. The soldiers, who were not protected from radiological exposure, then dumped 3.1 million cubic feet — or 35 Olympic-size swimming pools — of waste into an unlined bomb crater on the atoll’s Runit Island.

In 1986, the United States and the Marshall Islands signed a Compact of Free Association that provided the Marshallese government with funding, allowed its citizens to work and travel in the United States without visas and provided the U.S. government with a strategic military base on Kwajalein Atoll — the centre for U.S. intercontinental ballistic missile testing, as well as a crucial node in its space program.

Negotiations for renewal began during 2020 but have since stalled, noted Rep. Paul Gosar (R-Ariz.), the ranking member of the Natural Resources Oversight Subcommittee, who blamed “fumbling” by the Biden administration.

“If he fails to renew our compact with the Marshall Islands he could be handing China another win,” Gosar said of President Biden.

According to documents reviewed by The Times, as well as testimony at the hearing, U.S officials have signaled to the Marshallese that the nuclear legacy is not up for discussion.

It’s a thorny point for the Marshallese, who are worried about the lingering effects of the nuclear waste left in their nation, decades of persistent health concerns, and a fear that United States officials have not been forthright or transparent about the risks the nuclear waste poses to their health and environmental well-being.

In 2012, Congress ordered the Department of Energy to periodically conduct groundwater testing at Runit Dome, with no more than four years to span between tests.

The Department of Energy has so far only collected preliminary samples; agency officials have cited a lack of funding and the pandemic as hindrances.

According to a U.S government presentation delivered in 2019, Runit Dome is vulnerable to leakage caused by storm surge and sea level rise, and its groundwater, which is leaking into the lagoon and ocean, is severely contaminated with radioactive isotopes. Testing of sea creatures in the surrounding lagoon, including giant clams, shows high levels of radioactivity.

“The U.S government unquestionably has moral responsibility here — they made the nuclear bombs, detonated them over the Marshall Islands, did a slipshod job of cleanup, and tried to stick the local population with the lethal residue,” he said. “Perhaps at least some in the government are edging toward acknowledging our legal responsibility.”

Others at the hearing underscored the importance of the negotiations and expressed frustration that the U.S negotiating team — which does not include any politically appointed representatives from the State Department — has little progress to show.

“I have to admit I am startled at the lack of negotiations that other witnesses have pointed to,” said Dean Cheng, the Heritage Foundation’s expert on Chinese military and space capabilities, who provided testimony at the hearing.

“I can only say that given the looming threat posed by the People’s Republic of China, it is my hope that both the executive and the legislative branch will work together to basically get these talks moving because time is running out,” he said. “There are others out there who are watching and waiting to step up and exploit the opportunity that we will be presenting them on a silver platter.”

For Rhea Moss-Christian, the chair of the Marshall Islands National Nuclear Commission, the issue was more personal. Her mother was exposed to the testing, she said, and she and now her children live with that legacy.

In an interview before the hearings, she noted the U.S’ lack of concern for the Marshallese, pointing to the time the meeting was held — 10 a.m. Washington, D.C., time.

Moss-Christian, who lives in Pohnpei in Micronesia, had to log in at 1 a.m. her time Friday morning to be present for the teleconference. For her colleagues in Majuro, the Marshall Islands’ capital, it was 2 a.m.

“We’re just island peoples living in the middle of the Pacific, so far away as not to even be considered,” she said. “That’s what they thought when they used us as a testing site, and it still hasn’t changed.”.