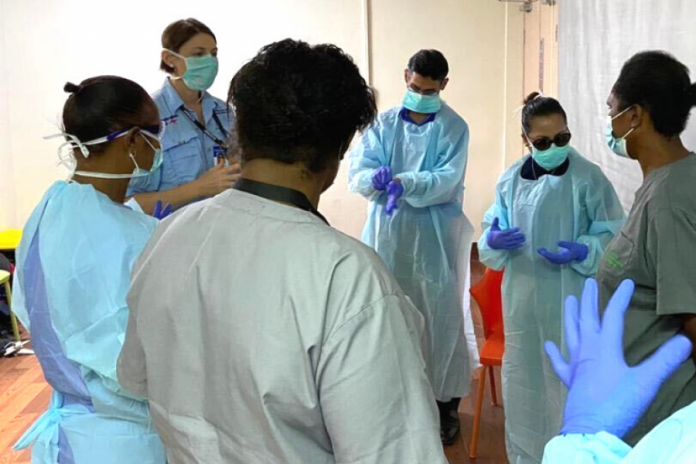 Complacency and vaccine hesitancy at all levels of society have left PNG wide open to delta infection. The country needs outside help – and very quickly.

A little later than expected perhaps but the delta strain of COVID-19 is now ripping through Papua New Guinea, threatening to overwhelm its fragile health system.

Hospitals in Port Moresby, Lae, Mt Hagen and Goroka have scaled down non-essential services to deal with rapidly growing cases while scrambling to set up overflow COVID-19 wards in nearby sports facilities.

Goroka hospital remains perilously close to running out of oxygen, and its morgue is full and has run out of body bags.

There is little testing but what exists paints a truly terrible picture. Of the 1848 tests conducted across the country of more than 9 million people between September 27 and October 3, 82 percent tested positive. Seven out of 10 people presenting at Port Moresby’s largest hospital with symptoms are now testing positive.

As of 03 October, only 140,000 Papua New Guineans had received their first jab, slightly more than 1.5 per cent of the country’s adult population and one of the lowest rates in the world.

Clearly, this is a recipe for catastrophe and indeed PNG’s health system is already on the edge of a crisis. As its nearest neighbour, dear historical friend and most important bilateral partner, Australia has an interest, and responsibility, to do everything it can to help PNG avert disaster.

It is unacceptable for a nation a mere four kilometres from Australia – with a population set to match ours by 2050 – to have the delta strain running unchecked through a largely unvaccinated population. The reality for Australia is that our own prospects for economic recovery and reopening borders depend on the ability of our nearest neighbours to do the same.

PNG’s leaders should and must take the lead – but have little appetite to acknowledge the scale and severity of the crisis.

Papua New Guinea has been here before. In March, the country was forced to deal with a similar surge of pre-delta COVID-19. Port Moresby’s main hospital was overrun and case numbers were increasing at an exponential rate. The system was close to a breaking point. Swift action, and a lot of luck, staved off the worst. Lockdowns were initiated, medical teams were sent in, and crucially vaccines were rushed into the country to at least protect frontline workers. PNG dodged a bullet, and the case numbers stabilised at a much higher but more manageable rate.

Yet while that crisis bought PNG and its development partners time, it appears to have led to complacency. There should have been a concerted effort to shore up the wobbly health system and coordinate a national information campaign to help push back against the chronic misinformation plaguing vaccine rollouts in the country. Politicians returned to business as usual, and vaccine hesitancy has calcified with a growing consensus that COVID-19 will just be another disease to be “lived with” alongside tuberculosis, malaria and other household name diseases in PNG.

This complacency has left PNG exposed – and the crisis is different this time. Delta is more contagious and more deadly. Daily averages are already eclipsing the March outbreak and there are no indications of slowing down. Without immediate intervention, PNG’s health system will collapse.

Australia must take the lead in coordinating an international response. The PNG government has already made the call for “urgent support from International Emergency Medical Teams”.

On Saturday, a small Australian Medical Assistance Team (or AUSMAT) was deployed to the PNG capital, similar to deployments earlier this year. This team should be available not just to Port Moresby, but scaled up and deployed into the provinces most badly hit. This should form a backbone of a coalition of partners, such as those that were sent from Germany and the United States in March, to be deployed across the country’s 22 provinces.

Alongside the medical teams, Australia should provide urgently needed medical supplies – from oxygen, to PPE, and critical medical supplies such as dexamethasone. Whatever logistical support is required to get these supplies and equipment to where they are needed, including Australia’s Defence Force, should be mobilised.

Alongside shoring up the frontlines, we need to redouble our efforts with the PNG government to turn around the country’s terrible resistance to vaccines that is being fuelled by rampant misinformation on social media.

The scale of this challenge cannot be overstated – vaccine hesitancy is being represented in all regions and demographics from the uneducated to the elite, but as we know from Australia, nothing breaks complacency like a crisis. The PNG government must use this outbreak as an opportunity to redouble efforts to get as many people across the country vaccinated.

Australia should spare no expense in providing the expertise and resourcing to help mobilise a localised and nationwide effort through Facebook, businesses, churches, sports leagues, NGOs, and the media. PNG’s successful campaign to counter the HIV epidemic in the early 2000s could serve as a starting blueprint.

These interventions will be a big ask. Papua New Guinea’s leaders should and must take the lead – but have little appetite to acknowledge the scale and severity of the crisis – with a hobbled economy and an election next year where half of them are likely to lose their seats.

In Australia, there will be immense resistance from the states to part with stockpiled medical staff or supplies as we brace for our own health systems to be tested.

But although the cost of action will be high, the costs of inaction will be far greater. Only through bold, immediate action can we help PNG stave off a catastrophe. There is a great deal at stake. The strength and speed of our action will not only save many lives from COVID-19 and the potentially worse non-pandemic health impacts of a broken system, but it will also help strengthen an already strong and crucial regional bond. It will be remembered. We have no choice but to act, and act now. We must do all we can to stand in steadfast support of PNG through this most difficult time, for its sake as well as our own.

Jonathan Pryke is the director of the Pacific Islands Programme at the Lowy Institute. Professor Brendan Crabb is the chief executive officer of the Burnet Institute.