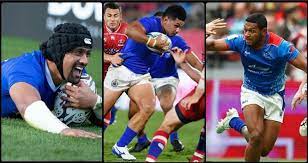 Moana Pasifika have continued their spending spree in the lead-up to their debut Super Rugby Pacific campaign by announcing the signings of three Manu Samoa internationals.

Nine-test midfielder Henry Taefu and two-test utility backs Neria Foma’i and Tomasi Alosio have all signed for the new expansion franchise ahead of the 2022 season.

Taefu provides the most experience of the trio after having made his Manu Samoa debut against Tonga in Nuku’alofa four years ago.

Since then, the 28-year-old has featured regularly for Samoa at test level, starting in all four of his nation’s matches at the 2019 World Cup in Japan.

A former Australia U20 representative, Taefu has strong experience at the lower levels of the game, beginning his professional career in the now-defunct National Rugby Championship with the Greater Sydney Rams in 2014.

He then moved to Brisbane City the following year and was handed his first taste of Super Rugby experience with the Reds in 2016 before jetting abroad to join French club Colomiers in the second-tier Pro D2.

Taefu then returned to Australia in 2018 to link up with the Western Force in Global Rapid Rugby, and remained onboard with the Perth-based franchise through until this year.

He became a mainstay in the Force’s starting lineup, even after their induction back into Super Rugby last year, and went on to make his NPC debut in August, but has been limited to just two outings for North Harbour due to Covid-19.

By comparison, Alosio, a veteran sevens star for Samoa who has played more than 200 times for his country in the abbreviated form of the game, has enjoyed a lengthier spell in New Zealand’s premier provincial competition this year.

The 29-year-old has played seven times and scored one try as a wing for Wellington this year, six years after he scored three tries in nine outings as a midfielder in his debut campaign for the Lions.

In between his two spells in the Kiwi capital, Alosio made more than 200 appearances for Samoa on the World Sevens Series circuit.

Alosio was joined in making his first appearances for Samoa earlier this year by Foma’i, another veteran sevens star featured on the World Sevens Series circuit for Samoa over a five-year span between 2013 and 2018.

The same can’t be said for Foma’i, who has flourished for Hawke’s Bay this season as the Magpies sit atop the Premiership standings.

A regular for Hawke’s Bay since 2019, Foma’i has played in six of his side’s seven matches so far this year and has scored three tries from the right wing.

The 29-year-old has previous playing experience with Southland, having played for the Stags in 2017, and made his first two test appearances for Samoa in their World Cup qualifiers against Tonga in July.

Foma’i, who also played twice for Samoa against the Maori All Blacks leading into the Tonga tests, will be joined by provincial teammates Ere Enari and Solomone Funaki in the Moana Pasifika set-up.

Both players were announced as two of four player signings over the past week, with the other new additions being former Wallabies playmaker Christian Leali’ifano and ‘Ikale Tahi utility forward Sione Tu’ipulotu.