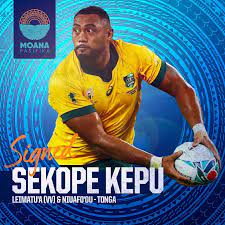 Moana Pasifika have pulled off another major signing, adding former Wallabies prop Sekope Kepu to their squad ahead of the 2022 Super Rugby Pacific season.

Kepu played 110 games for the Wallabies, making his debut in 2008, becoming the first prop to bring up the century for Australia.

He would also go on to play 141 games for the Waratahs, helping them to their inaugural title in 2014.

The 35-year-old has since been plying his trade in England for London Irish after heading overseas in 2019, recently signing a deal with Counties Manukau to play in New Zealand’s NRC.

“With 110 test caps to his name, former Wallaby Sekope Kepu (Counties Manukau) will anchor our scrum in 2022,” the club said via social media.

“Kepu has played 295 professional matches since his debut in 2006 and bring with him a wealth of knowledge to impart on our exciting, young squad.”

Kepu joins fellow Australian Christian Lealiifano in the squad, with the Pasifika set to be based in Auckland.

Head coach Aaron Mauger confirmed that they have all but signed their playing roster for 2022, having announced Samoan trio Neria Fomai, Tomasi Alosio and former Force outside back Henry Taefu on Monday.

“We’re really excited by the squad,” he told SENZ.

“I know some of them will be unknown to many but the potential and ability of the guys to hit the ground running and make an impact on Super Rugby is massive. I’m really excited,” he said.