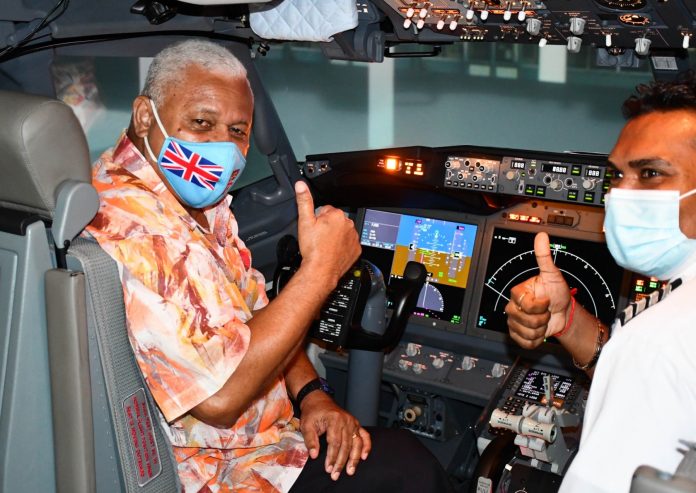 Prime Minister Voreqe Bainimarama said the multimillion dollar facility ensured pilots were kept airworthy and cabin crew were able to do their in service training.

Bainimarama highlighted that through this, Fiji Airways was able to bring in not only vaccines but also operate repatriation flights.

“Our national Airline has operated more than 355 repatriation flights to reunite Fijians and visitors alike with their families and loved ones. For one full year we safely repatriated over 46,000 Fijians from overseas. Between April 2020 and July 2021, Fiji Airways flew almost 13,000 tonnes of Fijian exports.

Bainimarama said Fiji Airways wasn’t profiting off any of these flights.

However the Prime Minister said they ran them at cost because the country needed its airline fully enlisted in this national effort.

“And it isn’t only Fijians who have benefitted. When the airline of New Caledonia needed to keep their pilots certified, they came to Fiji and they came to this academy. Moving forward, this academy is open to any pilots in the region and internationally, who seek its services.”

According to Bainimarama all of this decreases the need for expat pilots in the Pacific.

He states that Pacific flights should be flown by Pacific people.

Bainimarama has called on people who dream to be pilots that they can learn the profession here and also train at home.

The new $60million (US$30 million) Fiji Airways Aviation Academy in Namaka, Nadi was officially commissioned by Bainimarama this week.

The key features of the academy are the two state of the art Level D certified full flight simulators which include an Airbus A330 simulator and a 737 MAX simulator.

The 737 MAX simulator housed at the Fiji Airways Aviation Academy is one of a few simulators in the Southern hemisphere.