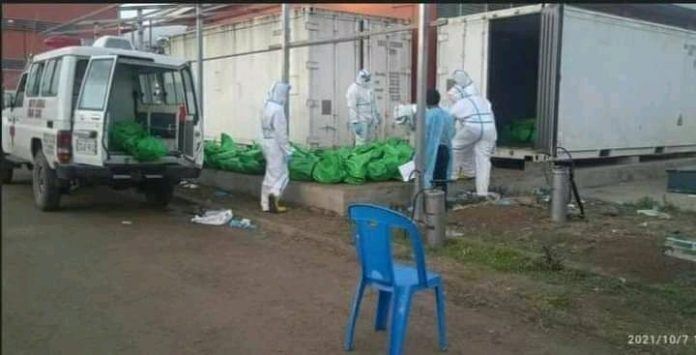 The stench of death is overwhelming as the three hospital attendants opened the containers containing the bodies of those who died from Covid-19 at the Goroka Hospital, in Eastern Highlands Province.

Nine to 15 people die each day in Goroka and its seven other districts. The figures are yet to be relayed to the National Control Centre (NCC).

The 40 beds are all occupied. Some patients have to sit on chairs to be given oxygen.

Three children under the age of five are also fighting for their lives in the isolation ward.

Sister Lynette Baba, in charge of the Covid-19 isolation ward, told The National that they were struggling daily to help patients.

Governor Peter Numu announced the two-week lockdown to try to contain the Covid-19 transmission. Provincial administrator/controller John Gimiseve said tests would be conducted at the entrances to Goroka at Kassam and Daulo.

“Roadblocks will be set up in the eight districts with the disciplined forces assisting the surveillance team to check on travelers,” Numu said.

“There will be an isolation centre built at the National Sports Institute to ensure those who tested positive are kept there in isolation.”

A body bag lay on a stretcher outside the container. Relatives of the deceased people, some covered in black ashes or red clay, mourn. They know they cannot touch the body of their loved one.

One man said he was sad that he could not give his late cousin a proper send-off.

“I can’t tell you my name as many assumed that my cousin died of other superstition powers. But I was informed of his medical diagnosis,” he said.

“I watched him fade away before my eyes. The family members have quietly farewelled him. We have selected a casket for him and now we can prepare a burial plot as he is laid to rest by hospital officials.”

“When a person dies, our attendants (take the body) to the morgue, and we tell the family to provide a casket,” he said.

“Once a burial plot is selected by the family and forms are filled, the body is placed into the casket. Hospital staff dressed in PPEs take the casket back to the village, put it into the ground, cover it up, and that’s it.”

Morgue attendant David Awo said since the beginning of September, many bodies had been brought to the morgue.

“I have never seen this happen in my years of operating as the morgue man. This is every day. We hear the sirens and we know it’s either an emergency or someone is being brought to the morgue.

“All we can do is put the body into body bags and put them into the two containers.”

On Friday evening, sirens can be heard all over Goroka.

The ambulances are there to assist a victim or remove a body. Families ask the hospital for an ambulance to assist them. By the time the ambulance gets to the family home, sometimes it is too late.

Meanwhile, four people have died from Covid-19 at the Mendi Provincial Hospital isolation centre and two others in their villages as fatalities continue to surge, Dr Joseph Birisi said.

Some frontline workers are starting to “burn out” from the long hours.

“We have 14 inpatients and there are only 12 beds available at the isolation centre,” Dr Birisi said.

“Because of the surge, we have scaled down services especially in the outpatient unit and consultation clinic to move staff to priority areas.”

Dr Birisi said patients with moderate symptoms were sent home because there were not enough beds.

He said the hospital also had a shortage of oxygen supply, personal protective equipment, consumables and N95 masks for staff members.

“We do not have the capacity and manpower to sustain the influx of patients from all districts, as well as others from Kandep in Enga, Tambul, Western Highlands and Magarima in Hela,” Dr Birisi said.

“We are facing a big problem and need support from donor agencies, the five district development authorities and the provincial government,” Dr Birisi said

He said they were encouraging health workers and people to get vaccinated.

The Port Moresby General Hospital (PMGH) had more than 100 on Friday.

Cannon said more patients were expected at the centre as cases continued to rise in the National Capital District.

“We are seeing a steep rise in the Covid-19 cases in Port Moresby,” he said.

“Currently, (there are) 35 inpatients – 32 mild, two moderate and one serious cases.”

Cannon said 16 of those patients were on oxygen.

“With onsite medical staff supervision, the facility has capability to stabilise deteriorating patients whilst waiting transfer to PMGH,” Cannon said.

“There is sufficient equipment and beds, we do need more nursing and medical staff so we can take on more patients.”

He said between Friday and Sunday, St John Ambulance responded to 133 emergencies, 43 were for the Covid-19.

“We need to bring more ambulances on line right away to be able to respond to routine emergencies and the growing number of people needing help for severe acute respiratory illness from the Covid-19.

“We have reached out to the Health Minister (Jelta Wong) and Health secretary (Dr Osborne Liko) to see if they can permit some of the Apec (Asia-Pacific Economic Corporation) ambulances and new UNDP (United Nations Development Programme) ambulances to be used by St John. Cannon said 41 patients had been admitted to the Nightingale Taurama Aquatic Centre since it opened last Friday, three patients have subsequently been discharged and three returned to Port Moresby General Hospital due to deterioration in condition.

According information from PMGH on Friday, more than 100 patients had been admitted: 24 severe and 60 moderate.

Port Moresby General Hospital chief executive officer Dr Paki Molumi said the total number of deaths at the hospital related to the Covid-19 was six (as of Friday), all were unvaccinated.

WWF support the prohibition of shark lines and wire leaders