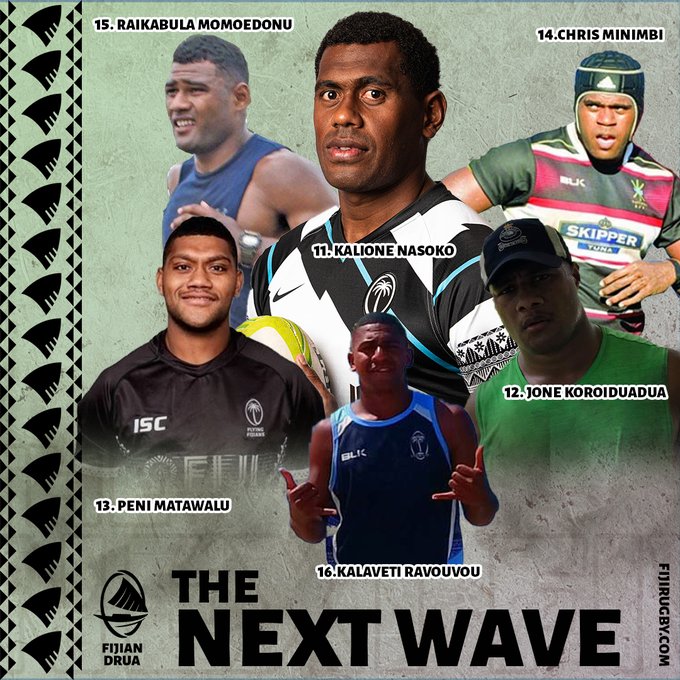 Fijian Drua Interim CEO Brian Thorburn said: “We’re delighted to introduce these six players today as part of our 2022 roster. The calibre of players in of this Wave Three Announcement reaffirms our commitment to play exciting, Fijian rugby right from the start of the season in 2022. Fans will notice that our final squad is beginning to take shape, and the vast majority of our squad of 37 will be announced by the end of next week.”

Thorburn stated: “Kalione Nasoko’s story is one of determination and sacrifice. He was playing a starring role for the Fiji Airways Fijian 7s team until an ACL injury in 2019 sidelined him for much of the year. He required surgery, was on six weeks rest and even needed crutches to move around. But he worked hard on his rehabilitation, recovery, and fitness to force his way back into the gold-medal winning team. Nasoko will bring his renowned line-break and offloading abilities as a centre to the Fijian Drua.”

Thorburn also spoke highly of the other five players who will be heading to Australia for pre-season training.

“Jone Koroiduadua is an exciting young prop, who was part of the Fijian Latui and made it to the Flying Fijians squad to the Autumn Nations Cup (ANC) last year. While there, he also caught the eyes of French Club Clermont and trialled for them. We’re very glad to be able to secure his services for the Fijian Drua to boost our prop stocks.”

“Ratu Peni Matawalu is a sharp halfback, always happy to snipe, and has a keen eye for the gap. He is another local star who has come up the ranks through the Fijian U20s, the Fijian Warriors and the former NRC Fijian Drua. He was also part of the 2020 Flying Fijians touring squad for the ANC.”

“Chris Minimbi is also a product of our domestic pathway through the Fijian U20s and the Fijian Warriors. He has a Flying Fijians cap to his name (2020 November tour) and has been impressive in the domestic Skipper Cup as a strong ball-carrying lock, which has earned him a call up to the Fijian Drua.”

“The story continues with flanker Raikabula Momoedonu. He has captained the Fijian U20s (2018) and has been part of the Fijian Warriors as well as the Fijian Latui teams. Momoedonu is currently making waves with Northland in New Zealand’s Bunnings NPC competition.”

“Finally, we’re very excited at the prospects of unleashing Namosi’s Kalaveti Ravouvou. He is a blockbusting centre who features often on the try scorers list.”

Thorburn acknowledged the work of Fiji Rugby’s talent identification and recruitment teams in building a quality squad for the Fijian Drua’s debut Super Rugby season. 16 squad members have now been announced, and a further 21 are expected to be unveiled by the end of next week.