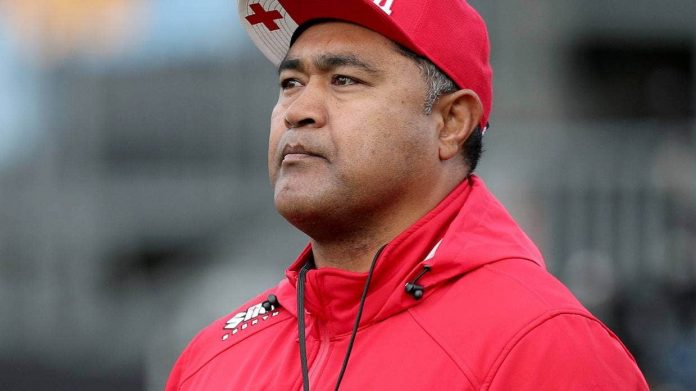 Tongan rugby coach and Wallabies legend Toutai Kefu is clinging to life after being stabbed in his Brisbane home while trying to defend his family during a reported break in.

The former back rower was at home when three people broke into his family home in Coorparoo at 3am on Monday morning.

According to Channel 7, Kefu was stabbed in the stomach after a brawl erupted and was rushed to Princess Alexandra Hospital in a serious condition with abdominal wounds.

Kefu’s wife, son and daughter were injured during the frenzy and were also taken to hospital.

His wife suffered a significant arm injury, while his son suffered lacerations to his back and abdominals and his daughter a hand injury.

Neighbours were reportedly woken and raced to the scene to help, holding down one of the alleged offenders who was arrested at the scene.

The other two remain on the run.

Kefu played 60 times for the Wallabies, including winning the World Cup in 1999 and scoring a match-winning and Bledisloe Cup-winning try in 2001.

He made 103 appearances for the Queensland Reds during his career before moving to Japan and eventually taking up coaching, and is currently the head coach of the Tongan national team.