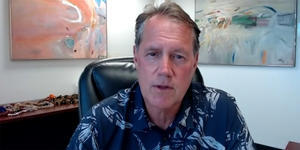 Amid a regional rift among the countries of the Pacific Islands Forum and increasing great-power competition between the United States and China, U.S representative Ed Case said that it would be a “terrible tragedy” if the Forum were to split up.

Five Micronesian states have announced plans to withdraw from the Forum over a dispute about the regional rotation of the body’s Secretary-General post.

“It’s up to the countries and jurisdictions of the Pacific Islands to decide how to maintain regionalism,” Case said.

“But I will say very directly that I believe that regionalism is not only an advantage for the Pacific Islands, but it’s really the only way forward. … There are many countries in the world that would prefer the Forum to not work—and that’s not in the interests of the Pacific Islands, it’s in their own interests. So I don’t think you want to let that happen,” said Case in a virtual news conference with Pacific Islands journalists Thursday.

Rep Case has taken a leading role in Congress on matters related to the Pacific Islands.

He co-founded the Congressional Pacific Islands Caucus and has introduced legislation aimed at increasing U.S engagement in the region.

He acknowledged that in the decades after the 9/11 attack, American engagement “lagged” in many areas of the world, including the Pacific Islands.

“To have a good partnership, you’ve got to show up,” he said.

As a result, Case said, the caucus members “want to make sure that we magnify the importance of the Pacific Islands within the halls of Congress and make sure that our national policy is consistent with our belief in the importance of the Pacific Islands. … We want to facilitate communication between our countries on issues of shared interests, whether they be development, trade, regional stability and security, or climate change. And finally, to assist in the formulation of sound national policy.”

The congressman pointed to remarks offered by U.S President Joe Biden at the Fifty-First Pacific Islands Forum Leaders Retreat on 06 August as “a statement by him of the United States’ belief that we are and always will be a Pacific country, and we intend to fulfill our responsibilities and assist as we can with the development of the Pacific.”

Case listed some of the goals he and the caucus are backing as including:

Recognising that the Pacific Islands face “not just an inconvenience but an existential threat” from climate change, Case said that under the Biden administration the U.S once again “comes to this not only from a position of the expectation of world leadership on climate issues, but from the fact that we are one of the major carbon emitters in the world. … This is a matter of grave significance to the human race, not to mention the rest of our natural world. And so we’re pushed by necessity, and we’ve lost a lot of time already.”

Case acknowledged that it is impossible to discuss regional issues without “recognising that the U.S views China as a real concern in the Pacific Islands.”

He described the friction between the two powers as “a contest of wills as to who can really present the best alternative to all of the world … in terms of which forms of government will succeed and prosper over time.”

In terms of defence, he said, “Our goal here is simple—to maintain a free and open Indo-Pacific where no one country can dominate and exert malign influence on any other country; where we do project the values and principles that we believe are the best way forward for our country and the world; and where we can, where necessary, assist with military endeavors in countries that need help and welcome our help, as we are doing with several countries in the Pacific Islands.”

Pressed by a journalist who said that broad, “cookie cutter” approaches to foreign engagement have previously failed in the Pacific due to the region’s diversity, Case said the legislation he and his colleagues have put forward “doesn’t try to micromanage how the actual assistance and programs are applied. We’re not trying to do a one-size-fits-all approach. … The idea is to re-engage in the Pacific Islands on the terms that each of them needs.” .

PNG authorities order corpses to be swabbed amid fear of undetected...