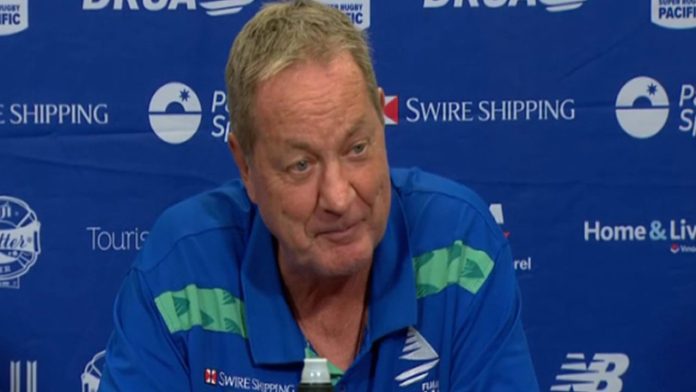 The head coach of the Fijian Drua Mick Byrne is looking forward to an improved performance from his band of warriors after being skinned by the Crusaders 3-61 last week at Christchurch’s Orangetheory Stadium when the side clashes with Pita Gus Sowakula’s Chiefs on Saturday at Churchill Park in Lautoka.

Byrne said the Drua wanted to bounce back in style despite being overwhelmed by the Crusaders.

“It’s the first time for most of the boys to be involved in a professional setup like the Drua,” he said.

“We looked at the review of the match played last week and saw that the Crusaders beat us at the work effort.

“They’re a great team but the Crusaders didn’t do anything that the other teams don’t do and I don’t mean any disrespect to them.

“The difference was that the Crusaders played with pace regularly for the entire 80 minutes.

“The Crusaders played rugby just like other teams do except that they were playing at a higher pace. “It was a huge learning for us.

“We want to go out on Saturday with the intention of playing the game at our pace against the Chiefs in Lautoka.

“The match on Saturday is our last game of the year against one of the best teams in the competition and the boys are excited to battle the Chiefs at home.

“We feel we can really go upward and move on to the next level.”

He added the weather conditions would not be an issue for the Drua on Saturday despite being in the cold of Australia and New Zealand for most parts of their maiden voyage in a 12-team competition.

Fijian Drua backline utility Jona Mataiciwa said they were excited to play in the country for the second time. He said the preparations had been going well at training this week.

“This is our last game of the competition and the boys will give all what they have on Saturday,” the 23-year-old said.

“Hopefully, we can come up with a win especially against the Chiefs. It will be a very good game.

“This is an important game for us and we want to finish off the season with a win which will set that positive mindset for the preseason and next year’s competition.”

Mataiciwa is familiar with the Chiefs’ style of playing being roped into the Fijian Drua from the Chiefs under-20 squad.

He thanked Fijian fans for supporting the team throughout the season.

“Hopefully we can get big support this Saturday to cheer the boys on. They bring a lot of energy into our game and the fans are part of us.

The boys will play hard for you so make sure you come down in numbers” Mataiciwa has played five matches for the Fijian Drua.

The match will start at 3pm.