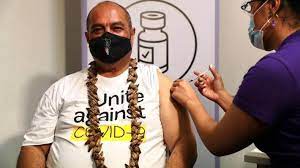 Pacific nations are swiftly rolling out their vaccine programmes, but some countries are struggling with vaccine hesitancy, logistical challenges and the risk of significant wastage.

The challenges facing some Pacific Island nations have been highlighted by the recent example of Papua New Guinea.

PNG has a population of nine million, but less than one per cent is vaccinated. Meanwhile, the country is facing significant outbreaks in at least three provinces.

Official numbers put Papua New Guinea’s total cases at 20,000, but the real number is believed to be much higher.

Earlier this month, the struggle to get jabs into arms meant PNG was forced to transfer 30,000 doses of vaccines donated by New Zealand to Vietnam, to avoid them being thrown out.

These doses came as part of a New Zealand donation of 146,000 AstraZeneca doses, which were procured through COVAX – a vaccine equity partnership between the World Health Organization, Gavi, the Vaccine Alliance and the Coalition for Epidemic Preparedness.

They were due to expire on Thursday. Instead of throwing them away, PNG responded to Vietnam’s appeals for vaccine supply.

“We are conscious of the challenges that countries face in rolling out Covid-19 vaccines, especially logistical and geographical challenges. These vaccines were due to expire on 30 September, so the priority of all partners was to minimise wastage.”

Rothwell said some vaccine wastage was normal, and even expected, in regular vaccination campaigns. But it was important to try to minimise wastage of the limited resource, and to ensure all countries could access the vaccines they needed, she said.

At a time when vaccine supply remains tight, PNG has struggled to administer the doses it has available due to widespread instances of vaccine hesitancy and the geographical remoteness of its population.

Head of Griffith University’s Pacific Hub associate professor Tess Newton Cain said this transfer was the best anyone could have hoped for, but it highlighted the significant challenges PNG was facing.

This was the only example of potential large-scale wastage in the Pacific so far, but there were a number of challenges to getting shots in arms, starting with supply.

Superpowers and western countries jockeying for influence in the region have donated vaccines through both bilateral arrangements and through the COVAX facility.

This vaccine diplomacy has helped Pacific nations begin their rollout, but in some cases it’s expected to take years to get a sufficient level of coverage.

New Zealand has promised millions of vaccines for the Pacific, but only a portion have been delivered.

The Government committed to a total donation of 2.376 million doses through COVAX. To date, 211,200 have been allocated and delivered – less than 10 percent.

This brings the total number of donated doses, which have been allocated and delivered in the Pacific, to 337,510.

Griffith’s Cain said there needed to be more reliance on COVAX to make sure Pacific countries have access to supply, but for some countries that was a less attractive option when looking to woo Pacific nations.

Then the question was how to convert vaccines into vaccinations – as was the issue in Papua New Guinea.

“Have you got the right number of people, with the right training? Do they have sufficient PPE? Do they have fuel to put into a truck, or the money to charter a boat to get out to the island?” Newton Cain asked.

Beyond that, it was important there was sufficient community confidence, so when the doses arrived, people were willing to be vaccinated.

Cain said building confidence and educating people about the vaccine was only possible if done by the right people – community leaders, chiefs, churches, teachers – and the approach was fitting for that particular community.

A vaccination programme was too important not to get it right first time, she said.

“If you turn up and stuff it up once, the chances that you can come back in a couple of months’ time and do it again is pretty limited.”

The nature of Covid-19 meant health workers from other countries couldn’t fly in and fly out.

While it might take some time to build the skills and capacity in-country, it would leave Pacific nations in a better position, going forward.

“Give a person a fishing line and it’ll feed their family for a day; give them a fishing net, and you’ll feed them for a lifetime.”

Like Newton Cain, Vaeafe emphasised the importance of leaning on cultural connections and community leaders, to ensure vaccines made it into arms, and weren’t wasted.

MFAT’s Rothwell said aside from the 30,000 doses that had to be transferred from PNG, MFAT was not aware of any unexpected levels of wastage for the doses New Zealand had donated.

The challenges faced by Pacific countries varied country to country, she said.

“Geographical isolation, cold storage requirements, workforce, and logistics for delivery and administering doses are some of the factors that countries need to consider and address as part of their vaccine rollout plans.

“As in New Zealand, pockets of vaccine hesitancy can be a challenge for some Pacific Island countries. This also varies country to country.”

While there were issues with the rollout in some countries, including Papua New Guinea and the Solomon Islands, New Zealand realm countries (Cook Islands, Niue and Tokelau) have had highly successful vaccination campaigns, so far.

This has seen the vaccination of more than 90 percent of their eligible populations over 16.

Queen Elizabeth II will skip Friday events due to discomfort