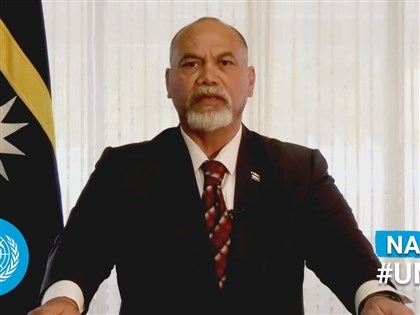 Nauru President Lionel Aingimea said last Thursday at the United Nations General Assembly (UNGA) that Taiwan has made exemplary contributions globally in the fight against the COVID-19 pandemic, including to his own country.

In his address at the 76th session of the UNGA, Aingimea said Nauru has made significant progress in its COVID-19 vaccination effort and its overall response to the pandemic, thanks to the ongoing support of its “genuine friends Australia, India, Japan and the Republic of China (Taiwan).”

He said Taiwan is an important global partner that is ready to share its experience in responding to the pandemic and should not be sidelined in international organisations like the World Health Assembly.

“We call on the United Nations to embrace willing and able partners like Taiwan, who share common global challenges, and to ensure that the people of the Republic of China (Taiwan) enjoy the same rights as the peoples of other nations,” Aingimea said.

The UN should live up to its own ideals of universality and respect the value of all individuals, he added.

Furthermore, Aingimea said, Taiwan deserves to be included in “Our Common Agenda,” a report by the UN secretary-general that offers a vision of a future where global decision making is more representative and grounded in common causes.

Taiwan has the capability to achieve the UN’s Sustainable Development Goals and is already supporting the targets, the Nauru president said in his address, which was delivered remotely.

He was the fifth leader among Taiwan’s 15 diplomatic allies to speak at the General Debate at the UNGA since it opened last Tuesday in New York City.

Three of the others, representing Palau, Guatemala, and the Marshall Islands, all expressed support for Taiwan’s international participation, while the Honduras president did not mention the subject.