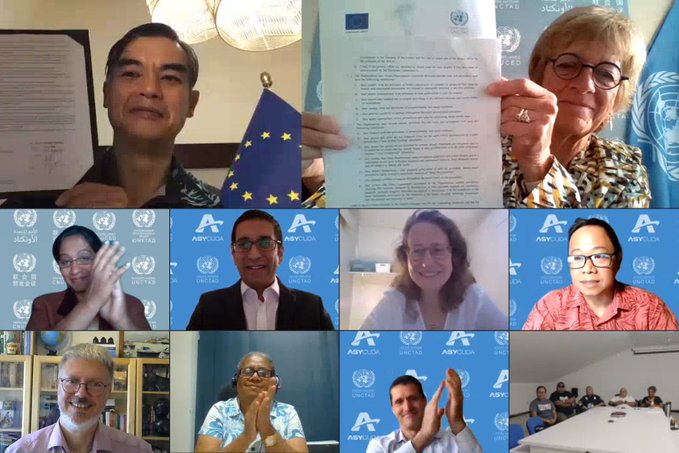 A new trade facilitation project was launched last week by the European Union (EU) and the United Nations Conference on Trade and Development (UNCTAD) to streamline customs clearance processes in the Pacific region and to generate efficiencies facilitating international trade.

Speaking at the launch of the project, the Ambassador of the European Union for the Pacific, Sujiro Seam said, “The IMPACT project is a key part of the Pacific Regional Integration Support Programme funded by the EU to facilitate and develop trade in the region and open new recovery paths from the negative socio-economic impact of COVID-19.”

“In partnership with UNCTAD, the IMPACT project will thus contribute to sustainable and inclusive prosperity in the region, which is the first area of focus of the new EU strategy for cooperation in the Indo-Pacific.” Ambassador Seam added.

The project will benefit from UNCTAD’s Automated System for Customs Data (ASYCUDA) programme. ASYCUDA will facilitate regional and international trade by improving customs clearance processes through the delivery of its customs management software, as part of trade facilitation agreements.

“We appreciate working with the EU on increasing the pace of international trade in Pacific Island countries,” said UNCTAD Deputy Secretary-General Isabelle Durant.

Durant said that ASYCUDA, as part of the IMPACT project, can make a real difference to businesses – big and small – in the region and accelerate socio-economic progress.

With the harmonisation of customs operations and the deployment of ASYCUDA software across all countries in the region, the project will support countries towards a faster and more efficient clearance processing. It will also foster closer cooperation via the electronic exchange of trade data and production of accurate trade statistics.

“Greater efficiency will boost trade and growth, as well as income, and having access to more data enables better decision-making. These are important ingredients for better outcomes for the economy and this is what we need in these challenging times,” Durant added.

Reducing the time and charges associated with trading across borders is expected to reduce the cost of imports and exports, making sectors producing goods and providing services (including tourism) more competitive.

The IMPACT project will also benefit micro, small and medium-sized enterprises by ensuring the consistent application of trade-related laws and regulations, resulting in more predictable costs.

The World Trade Organisation (WTO)’s Trade Facilitation Agreement (TFA) provides the most advanced international platform to facilitate trade. This agreement comes with provisions that expedite the movement, clearance and release of goods, while promoting cooperation between customs and other authorities on trade facilitation.

UNCTAD will also deliver activities to strengthen the institutional capacities of the secretariats of the Oceania Customs Organisation and the Melanesian Spearhead Group to support countries’ trade reform initiatives beyond the duration of the 40-month-long project…..