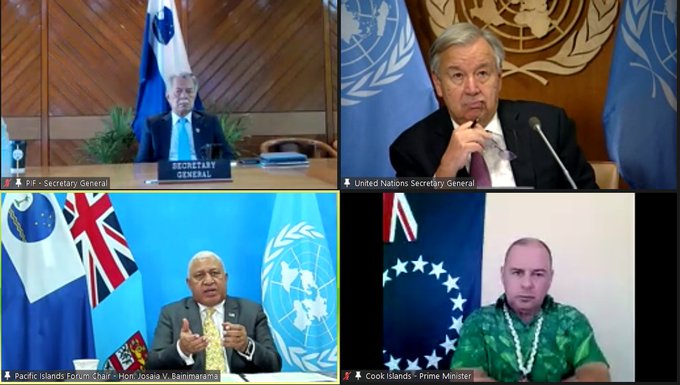 Pacific Leaders met with United Nations Secretary-General António Guterres on 23 September 2021 in a virtual meeting held on the margins of the high-level week of the seventy-sixth session of the United Nations General Assembly.

He noted that Pacific Leaders would soon consider the 2050 Strategy for the Blue Pacific Continent, a vital step in addressing the challenges facing the Pacific, from planning and owning its development agenda to building regional resilience and a blue economy.

He also welcomed the opening of a multi-country United Nations office in the North Pacific.

The Prime Minister urged the Secretary-General to continue to spread the region’s collective message of urgent climate action to the world.

Pacific Leaders present at the meeting exchanged views on climate-induced disaster preparedness and the Pacific Resilience Facility, the importance of preparations for the Conference of the Parties to the United Nations Framework Convention on Climate Change in November 2021 (COP-26), and the recently endorsed Declaration on preserving maritime zones in the face of climate-related sea level rise, offering the latter as a considered, moderate and targeted solution to the issue of sea-level rise and calling for all United Nations Member States and the international community to support the Declaration.

With regard to COVID-19, the Leaders acknowledged the international assistance provided to the region and reiterated their call for global leaders to support the equitable distribution of safe and effective COVID-19 treatments and vaccines.

Secretary-General Guterres welcomed the strong, unified Pacific voice on global issues, including climate change, and highlighted the urgency of stepping up collective efforts on climate action and oceans protection.

Noting that COP26 can be a turning point for the climate crisis, the Secretary-General urged the continued leadership of the Pacific on climate, including to push on the need for more ambition to bridge the gaps to keep the 1.5C temperature goal within reach and on adaptation, as well as for further international solidarity to support the needs of vulnerable countries like Small Island Developing States starting with the fulfillment of the US$100 billion goal and for all donors to allocate 50 percent of their climate finance to adaptation.

He hailed cooperation between the Pacific Islands Forum and United Nations, particularly on COVID-19 response and recovery, oceans policy, and the 2030 Sustainable Development Agenda.

He called on the region to adopt inclusive policies, based on universal human rights and gender equality, on its path towards realisation of the Sustainable Development Goals.