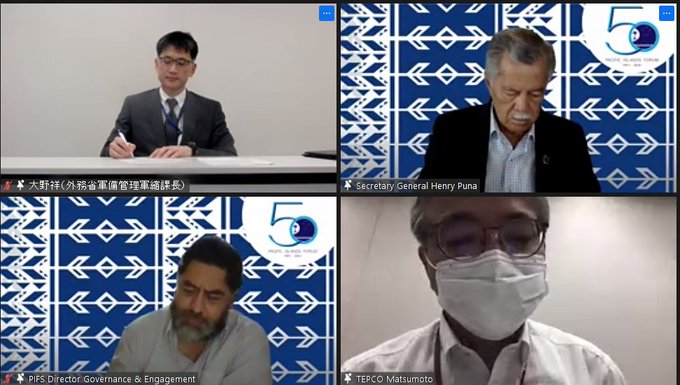 Pacific nations continue to raise questions and concerns in closed briefing sessions around plans by Japan to discharge over a million tonnes of treated water from the Fukushima Daiichi Nuclear Power Plant into the Pacific Ocean.

The Government of Japan committed to ongoing dialogue with Forum Members as a priority follow up to the PALM9 Summit in July. This followed Japan’s announcement in April of plans to begin discharge in 2023, for a period of up to 40 years. The announcement drew strong global response, including from the Forum Chair and Leaders.

In his opening comments at the third briefing on Tuesday, Secretary General of the Pacific Islands Forum Henry Puna noted the issues require “open and frank consultation” along with sustained dialogue at the political and technical level.

While appreciative of the information being shared by Japan, Secretary General Puna reiterated the region’s unequivocal need for information as being key to safeguard the Blue Pacific as a nuclear-free zone. “I appeal to the Government of Japan to continue to share the relevant information in its totality, and within agreed timelines.”

As reiterated by Forum Foreign Ministers on 27 July, the region is actively pursuing efforts to advance Forum Leaders’ commitments to international consultation, international law, and independent expertise to provide guidance and verifiable scientific assessments. To accelerate efforts, the Forum will engage independent experts to support the region’s efforts over the next months.

Thanking the Government of Japan, Secretary General Puna said he is hopeful there will be ways to address Pacific concerns to reach “solutions that are based on science, and consistent with legal and moral obligations.” .