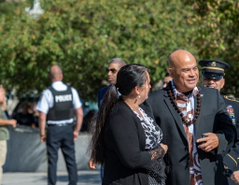 Federated States of Micronesia is seeking to expand its foreign engagement beyond the United States, and it is in Australia’s interests to answer the call, Gonzaga Puas writes.

Federated States of Micronesia (FSM) is situated in a strategically significant area in an increasingly contested oceanic space. The United States has a major presence in FSM and throughout the western part of Micronesia under the terms of the Compact of Free Association (COFA), while China is seeking to expand its influence in the region. In this changing geopolitical environment, Australia should enhance its engagement with FSM.

The Australian Government has had a strong partnership with FSM since establishing its embassy there in 1989. This was emphasised on 27 May 2021, when Australian Ambassador to FSM Jo Cowley met FSM President David Panuelo, who stated that “Australia has shown…that it is a true friend of the FSM…in ways both measurable and immeasurable.”

However, while Australia’s historic relationship with the FSM has been solid, in recent years significant divisions have emerged over each states’ long term priorities, particularly regarding climate change. But despite these differences, Australia has remained a long term, reliable aid partner to the north Pacific nation.

While the extent of Australia’s activity in FSM may appear limited when compared to that of the United States, the latter is obligated under the COFA to provide more than 60 per cent of FSM’s national budget. Within this context, the level and consistency of Australian aid and funding is remarkable.

The Australia–FSM aid partnership has brought mutual benefits to both countries as their relationship has gained strength over the decades. Development assistance programmes continue to flow to the FSM from Australia and have gradually increased. In maritime surveillance and security assistance, Australia has contributed the most towards preventing illegal fishing, bringing millions of additional dollars to the FSM.

Australia also receives support from the FSM at various international and regional forums, as shown by the FSM government’s support for the Canberra-led peace effort in the Solomon Islands known as RAMSI.

A strong relationship with FSM is also of vital interest to Australia’s security. This was emphasised by security analyst Anthony Bergin, who in a recent article warned Australia not to forget Micronesia, as ‘the strategic significance of [the subregion] is rising, and Australia is unwise to disregard the region’. Bergin recognised that Micronesia is part of Australia’s future security umbrella in the northwest Pacific.

This is derived from a broader understanding that Australia’s overall security benefits from a strong relationship with Pacific Island countries (PICs). Australia is an influential Pacific power and has played a significant role in ensuring the region is secure. Currently, Australia is involved in working with PICs in areas such as protection of the oceanic environment, containment of the COVID-19 pandemic, prevention of transnational crime, climate change negotiations, human trafficking, and maritime security. All are areas in which FSM has expressed particular interest in enhancing its capacity, something other aid donors have not been able to fully satisfy.

In light of these benefits, there are significant opportunities for Australia to further expand its relationship to FSM. For one, development assistance could be extend into tertiary education, something Michael Wesley from Melbourne University has advocated for. He suggested that Australia should focus on developing human skills by allowing more Pacific students to study in Australia, as upon their return to their home countries they can make long-lasting educational and diplomatic impressions.

For example, in 2018 the FSM congress called for the termination of the COFA with the United States. The congress also called on China to be the only country allowed to fish FSM’s exclusive economic zone. In 2020, President Panuelo also asked both the United States and China to respect FSM’s sovereignty in response to political tensions between those superpowers.

Additionally, while the United States initially signalled that it intends to continue COFA funding after the current arrangements end in 2023, much of the additional funding recently committed by the United States has been for military objectives regarding China. Outside of this, FSM and American negotiators are yet to agree on future funding priorities.

From the perspective of FSM, Australia acts with independence in the Pacific while also considering the position of its allies. Australia offers FSM a unique style of diplomatic engagement that is fair and far-sighted, with well-developed roots in the Pacific, and is positioned to play a potentially important role in bringing divergent priorities into focus.

For their part, Australia has distinct interests in Micronesia that neither fully overlap with, nor contradict, those of the United States. FSM is valuable to Canberra because a secure FSM means a more secure Australia. For Australia to gain greater influence in FSM, it would do well to support FSM’s interests in international forums.

Since its ‘Pacific Step-up’ in 2018, Australia has been presented with an opportunity to demonstrate goodwill by providing pandemic aid to PICs. Now might also be a good time for Australia to revisit its aid partnership arrangement with FSM, set to be reviewed in 2022, to see if it could do more.

FSM is on the northern frontier of Australia’s Pacific interests, at the point where geopolitical tensions with two of its major trade partners lie. As FSM now seeks to diversify its external partnerships, the Australian government should answer the call.

This article is based upon a paper published by ANU Department of Pacific Affairs (DPA) as part of its ‘In brief’ series.