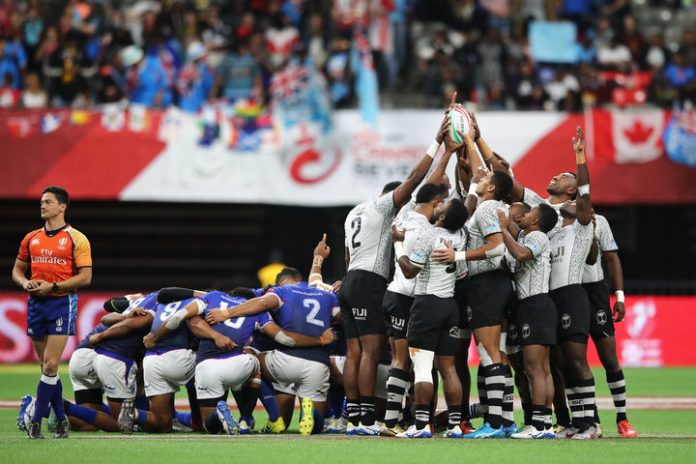 The Fiji and Samoa sevens teams will be missing when the men’s World Sevens Series gets underway in Canada this month.

The new season kicks off in Vancouver on September 18, with another tournament in Edmonton the following weekend.

But Fiji’s Olympic gold medal winning team and Pacific neighbours Samoa have joined New Zealand, Australia and Argentina in opting to skip the Canadian wing because of the ongoing effects of Covid-19.

Fiji’s players went more than four months without seeing their friends and families in order to achieve their Olympic dream in Japan.

The team is halfway through a six-week break, after completing two weeks in managed isolation following their triumph in Tokyo, while coach Gareth Baber is in Wales.

Fiji Rugby CEO John O’Connor told RNZ Pacific the team would only be allowed to train in bubbles because of the country’s Covid-19 crisis and putting a squad together to compete at short notice was not feasible.

“After six months of bubbles leading to Olympics, we are very mindful of player safety and welfare. Quarantine is also an obstacle since it’s unions who have to meet the cost.”

Samoa’s national team is continuing to train in Apia under the guidance of Muliagatele Brian Lima.

“Because we can’t go to Edmonton and Vancouver and then return home, we have to find a base somewhere in Dubai,” he said.

“We’re still in negotiations at the moment and unfortunately the cut-off dates for Vancouver/Edmonton was last week, Monday, which we had to declare that we can’t travel to that tournament.”

Samoa is keen to compete in Singapore at the end of October but will have to cover the costs of an extra month in Dubai before the next tournament in December, Seumanu said.

“It will be a massive commitment from them because once they’re out of the country there’s no way of returning home after the tournament.

“Dubai’s our preferred location and we’re still in talks with a few of our sponsors if they are willing to cover the costs of us being based there.”

The Manu Samoa and Mansuina 7s teams have already experienced an extended stay in Dubai, after their return home from the Olympic qualifying tournament in Monaco turned into a two week pit-stop.

With Samoa joining the three Tokyo 2020 medallists, Fiji, New Zealand and Argentina, in skipping the opening two legs, Seumanu said organisers might want to ponder if they should go ahead at all.

“Unfortunately they’ve only confirmed ten teams, so they were still waiting for another couple of teams to make the teams 12, but I think the best option for them is to really reconsider hosting those tournaments. It’s not worth it with the current situation with Covid.” he said.