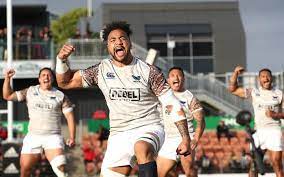 With ‘Super Rugby Pacific’ confirmed to kick off in February, the race is on for Moana Pasifika and the Fijian Drua to sign up their inaugural playing squads.

The Drua also have to decide where they will be based next season, with Fiji’s ongoing Covid-19 problems ruling out plans to play on home soil.

Flying Fijians prop Haereiti Hetet said the Drua was a hot topic of conversation when national squad during their recent test series against the All Blacks.

“It’s just like another platform really for Fijian players to showcase their skills for the world stage, in terms of it’s a step up from just playing their club and comps and stuff in Fiji and playing against the best,” he said.

“Obviously Super Rugby you’ve got Wallabies and All Blacks playing so it will be good for the Fijian players to test themselves against the best.”

The Bay of Plenty loosehead is in his fourth season of provincial rugby in New Zealand but has to juggle his playing commitments with work at the local timber mill in Otorohanga.

The 24 year-old has represented the Māori All Blacks and Fiji and could be among the players to benefit from Super Rugby teams that are dedicated to Pacific Island players.

“Yeah I’ve had conversations about this, it’s an option definitely. I don’t know where they’re based or anything like that but yeah it is a good opportunity.”

“It would have been a lot easier for both organisations that these were sorted a lot earlier,” he admitted.

“They had a lot of big players in their books when they started the conversations about playing for them – the Moana and the Drua – but then in the last month they had to make decisions and then sign overseas.”

“They’ve still got good players around that they’re working with, with their coaches and squad, and I think it will work out pretty quick because of the turnaround to get players sorted out and management…they’re ahead with those discussions and just waiting for the licence agreement to be ticked off and then away they sign off.”

Tonga Rugby Union CEO Peter Harding said at least 80 percent of the Moana Pasifika squad will be eligible to represent Manu Samoa or the ‘Ikale Tahi.

“It’s a 38-man squad…and 31 of them will be Samoan and Tongan qualified, so that’s the way it’s put together,” he said.

“The others are floaters at this stage – I think all new franchises that put teams together, no matter what sport they’re in etc, go through that, so we’re looking to share 31 players.”

T-Pole said it was important that Manu Samoa coach Seilala Mapusua and Tonga’s Toutai Kefu were heavily involved in the recruitment process.

“Where they tick off some players or maybe some players they put up and they get to ask the questions themself,” he said.

“I stay in touch with Seilala and Toutai about that and there’s good discussions where they say ‘why is this player there’, ‘why aren’t my 10 in my national teams or my locks’ or whatever, because this is set-up is to help and benefit the home unions.”

Peter Harding said a high performance plan for Moana Pasifika was already in development, which will ensure the team delivers on its promise to strengthen and develop the Samoa and Tongan national teams.

“What we want to do is make sure the pathway is correct and, in effect, that both the Samoan Rugby Union and Tongan Rugby Union, if they don’t own the project, then they’re right up to their neck in it and we will be the ones that will be the beneficiaries out of the project eventually.

“I think that was the way it was conceived by all people who put applications in and I think both Samoa and I are pretty happy with the way that is going.”

The Drua won’t be able to play games in Fiji next year because of the country’s ongoing Covid-19 situation.

T-Pole said Fiji Rugby is exploring a range of options and a final decision on where they will be based is expected shortly.

“They’ve been working hard on it. We’ve been working across the discussions the whole time, whether it’s going to be in NZ in Whangarei or in Australia on the Sunshine Coast.

“They’re well ahead of their discussions and we’re just trying to work out every detail and what benefits all parties and then we will roll with it.”

Moana Pasifika chair Sir Michael Jones said while the pandemic means their home games will be primarily in New Zealand next season, they were keen to play games in Samoa and Tonga if Covid restrictions allow.

“If that can’t happen in year one, it will definitely be an aspiration for year two,” he told RNZ.

“It is something that’s very much determined by the Covid restrictions. We’re looking forward to playing in front of a really vibrant, colourful and vocal fan base, whether that’s here in New Zealand or back in the Islands.”

Super Rugby Pacific will start next February with 12 teams playing a 15-week regular season with one points table.