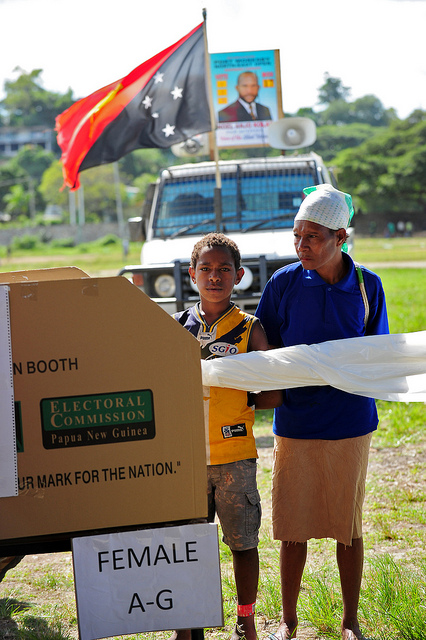 Opposition to the proposed amendment of the Papua New Guinea electoral voting system is mounting.

The proposed amendment notice is before Parliament as a Private Member’s Bill sponsored by Gumine MP Nick Kuman.

It proposes to change the voting system from the current limited preferential voting to first past the post.

The Opposition moved as a bloc and dealt the proposal a major blow saying they are against the idea of reverting back to the first past the post system.

Prime Minister James Marape, East Sepik Governor Allan Bird and Oro Governor Gary Juffa have all said in Parliament last week that they will not support the proposed changes, which will replace the LPV with the First Past the Post system, which has been used in the country since the first elections in the country.

Marape told Parliament last week he supported the limited preferential voting system as the way forward for elections in the country.

Although the prime minister has made his own stance on the matter known, his Pangu Party made up of an unofficial 37 MPs, is yet to officially announce which direction the party will go.

So far only Kandep MP Don Polye has openly supported the idea of reverting back to FPTP – but with the opposition adding to the list of MPs opposing, the bill seems doomed to fail.

It was decided through an opposition caucus meeting that all parties in the Opposition will oppose the proposed change.

Opposition leader Belden Namah said they invited Kuman to address them at caucus last week where he explained his reasons for introducing the Bill.

“After examining his reasons, we have decided that there is no time to deliberate this matter properly between now and the 2022 elections.

“Secondly, changes to a constitutional law should not be the prerogative of one individual.

“That is why we have the Constitutional Law Reform Commission.

“Any attempt to change the Constitution or constitutional laws should be submitted to its jurisdiction.

Namah said they stand by the recommendations of the commission after its extensive two-year consultative process.

“The CLRC has indeed received submissions proposing a return to FPTP system and in its wisdom has recommended against it, although it has mentioned that both types have their upsides as well as disadvantages.

“This Parliament does not have the luxury of time after the executive government colluded with the Speaker to deny the people 40 days of compulsory sitting time.

“That was the time we could have utilised to do this work,” Namah said.

“Finally, common roll updating, voter awareness and even the biometric system, if it can be brought into application on time, will take too much time and resources.

“We therefore will not support this proposal and urge MPs on both sides of the house to do likewise.”

The Opposition is made up of 22 MPs from seven different parties; with Ialibu-Pangia MP Peter O’Neill’s People’s National Congress party as the largest in Opposition and the biggest party so far to affirm their opposition to the proposed change.