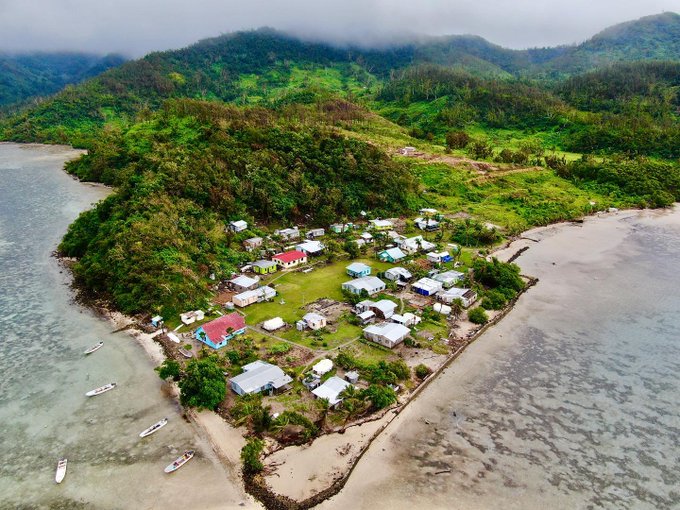 While holding out hope, Pacific Islanders have no choice but to endure the impacts of climate change.

Although they have done little to contribute to global warming, people in low-lying Pacific islands fear that their nations may no longer be habitable or even exist within this century as they may face some of the dire consequences of rising seas aggravated by fiercer cyclones.

“We are one of the seven households in our community that had been moved to higher ground because we were amongst those in the danger zone affected by high tide and rising sea,” said Kelepi Saukitoga, a 45-year-old farmer who has been living for 25 years in Narikoso, a coastal village on Ono Island, Kadavu in Fiji.

Accessible only by boat and about 85 kilometers away from Fiji’s capital of Suva, Narikoso is one of the seven villages on Ono Island and has more than 100 individuals. The Fijian Government has identified it as one of the 40 villages that needed to be relocated to higher grounds due to the climate-induced impacts of rising seas, intrusion of saltwater and coastal erosion.

The story of Saukitoga and other families in Narikoso who were relocated in November 2020 provides valuable lessons for future relocation projects in the Pacific region.

“I believe that in years to come, the other members of the village will face drastic impacts of sea-level rise,” lamented Saukitoga, a former Narikoso village relocation committee chairman. “We found out that in some homes, the saltwater had already entered their sewage system and that will affect the health of the village and the families.”

For most of the people in the Pacific like Saukitoga, this is the new normal. Their message comes at a time when scientists warned in early August 2021 that every region in the world is witnessing irreversible human-induced climate change impacts, including sea level rise, floods, heavy rainfall, and glacier melting. (See related story here: Irreversible human-caused climate crisis threatens Pacific Island nations)

According to the 6th Assessment Report of the Intergovernmental Panel on Climate Change (IPCC) extreme sea level events that previously occurred once in 100 years could happen every year by the end of this century.

It also stated that “increasing warming amplifies the exposure of small islands, low-lying coastal areas and deltas to the risks associated with sea level rise for many human and ecological systems, including increased saltwater intrusion, flooding and damage to infrastructure.”

The 6th Assessment Report complemented the findings of the previous special report on the Ocean and Cryosphere in a Changing Climate (SROCC) released in 2019 stating that the global mean sea levels will most likely rise between 0.29 meters and 1.1 meters by the end of this century.

The SROCC also noted that even under the most optimistic emissions reductions scenarios, the world will experience sea levels for several centuries to come, adding that coastal areas and small, low-lying countries will have to consider a wide range of adaptation strategies, including migration and relocation.

“The 6th IPCC Assessment Report is clear. This is our last chance, all of us must act now, “ said Kosi Latu, Director-General of the Secretariat of the Pacific Regional Environment Programme (SPREP). “ We must call upon humanity, we must have the political will to act and everyone must make the changes needed to reduce gas emissions today.”

Latu also reaffirms his call for urgent climate action, saying that Pacific Islanders are feeling the impacts of climate change now, and it is only going to get worse.”

“ We must take action now. For us, the report confirms what we are already experiencing—that the most intense tropical cyclones are increasing in intensity and will continue to do so,” he added.

Many countries have fostered climate resilience strategies in the Pacific like building sea walls, improving water management systems, planting mangroves, raising the elevation of its islands, relocation of families and other solutions that safeguard cultures and livelihoods.

For now, while Pacific Islanders like Sautikoga have no choice but to endure the impacts of climate change, they still have hope for their islands.

“We are doing all we can to protect the community from the rising seas. We do not have access to the relocation guideline but we know that the government has their plan for communities like ours, ” Sautikoga said.

Pacific nations are bracing to lose tons of Tuna from their...