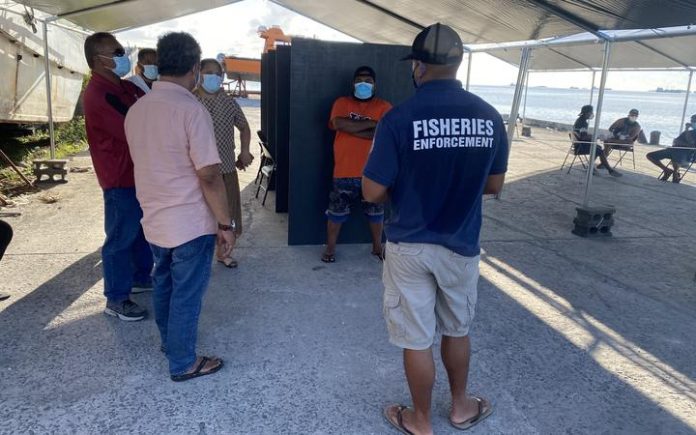 Covid vaccinations for commercial fishermen are being ramped up and expanded, following preparations involving multiple government agencies in the Marshall Islands over the past two weeks.

The Marshall Islands became the first nation in the Pacific islands to offer Covid vaccinations for fishermen on longline and purse seine vessels when it started in June in Majuro.

But after vaccinating 312 fishermen that month, the programme was paused as Ministry of Health and Human Services public health teams focused on vaccinating islanders living on remote atolls around the country.

Planning over the past two weeks put things on track for the latest rollout to start Friday afternoon, with plans for the vaccine program for fishermen to continue on a weekly basis, said Marshall Islands Marine Resources Authority (MIMRA) Director Glen Joseph.

He said that following discussions with the National Disaster Committee’s Maritime Working Group, the Ministry of Health and Ports Authority, plans are moving for a “reinforced rollout” of Covid vaccines for fishermen.

He said that four purse seine vessels were ready for their crews to be vaccinated Friday or at the earliest opportunity available.

Although tuna transshipment activity declined significantly in 2020 due to strict port entry rules, with the relaxation of entry requirements starting in May this year, the transshipment business has returned to pre-Covid levels that had made Majuro the busiest tuna transshipment port in the world from 2015-2019.

Joseph pointed to the obvious economic benefit of offering vaccinations to commercial fishing crews, both from the standpoint of keeping fishermen healthy and for the Marshall Islands to attract transshipment and port use business.

The Marshall Islands is the only Pacific country to start vaccinating commercial fishermen and has been praised by other countries for doing so.

The Forum Fisheries Committee ministers’ meeting earlier this month, “congratulated the Republic of the Marshall Islands on steps it has already taken to vaccinate crew on fishing vessels in Majuro, including foreign crew,” according to the statement issued from the meeting.

The Ministry of Health reported Wednesday that when both fully vaccinated and those who have received their first of two Covid shots are combined, the adult vaccination rate for Majuro is 92 percent and Ebeye is 95 percent.

The outer islands rate is lower but vaccination is ongoing in the remote islands.

Joseph said that MIMRA has created a web-based app for locally-based agents who represent fishing vessels to submit requests for entry of vessels.

The web app is linked to MIMRA, Customs, Immigration, Ports Authority and the Ministry of Health, he said.

“When the agents lodge their entry request, all the information is in the system for review (by the different agencies),” he said.

“If they meet the entry requirements, they can request vaccinations,” Joseph said, adding that with Majuro being the only island in the Pacific doing this, it has economic spinoff benefits as it supports tuna transshipment in Majuro.

MIMRA, Ports Authority and the Ministry of Health are collaborating on a revised plan for dock vaccinations that Thursday set up the vaccination operation under tents at one end of the main commercial dock in Majuro, with partitions with small plexiglass windows to separate the Public Health staff from the fishermen.

The experience from the initial vaccine rollout in June has helped government officials to improve management and security of vaccine provision to tuna fishing crews.

The aim, said Joseph, “is to cover all of our domestic fleet in the next few months” as well as look at vaccinating transshipment crews and possibly offering vaccines to crews of other vessels.

“Is there a risk in letting them come on shore (on the dock) for vaccines?” Joseph asked. “No, look at the entry requirements: They must be at sea for a minimum of 14 days, then they can do the vaccines on the dock.”

The last thing MIMRA wants is fishing crews sick with Covid that could interrupt commercial tuna operations as well as pose risk to health workers and local residents if crew members must be medically evacuated off vessels to Majuro hospital.

“There is still a risk, but it is greatly reduced with vaccination,” he said.

Joseph said MIMRA met with fishing vessel agents Wednesday to update them on the plan for the reinforced vaccine rollout.

“Now, with the web app, we have a system set up to respond efficiently to the agents’ vaccine requests,” he said.

Joseph also noted that since last week, there has been a big increase in the number of purse seine vessels fishing in the Marshall Islands southern exclusive economic zone, which means the tuna schools have moved into these waters.

“As a result, we will likely see more traffic (vessels in Majuro) including transshipment,” he said.

The Ministry of Health is using the single-dose Johnson & Johnson vaccine for the fishermen.

The U.S Centres for Disease Control (CDC) has provided both Modern and Johnson & Johnson vaccines to the Marshall Islands.

The first batch of Moderna vaccines arrived in late December 2020 and the country has been vaccinating residents since that time.