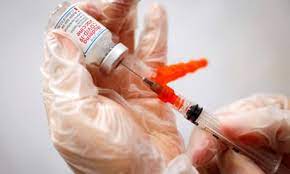 The World Health Organisation (WHO) has condemned the rush by wealthy countries to provide Covid-19 vaccine booster shots while millions of people around the world have yet to receive a single dose.

Speaking before U.S authorities announced all vaccinated Americans would soon be eligible to receive booster doses, WHO experts insisted there was not enough scientific evidence to support the additional shot.

Providing them while so many people were still waiting to be immunised was immoral, they argued.

“We’re planning to hand out extra lifejackets to people who already have lifejackets, while we’re leaving other people to drown without a single lifejacket,” said Dr Mike Ryan, the director of the WHO’s health emergency programme.

“The fundamental, ethical reality is we’re handing out second lifejackets while leaving millions and millions of people without anything to protect them.”

Earlier this month, the WHO called for a moratorium on Covid vaccine booster shots to help ease the drastic inequity in dose distribution between wealthy and poor countries. That has not stopped a number of countries moving forward with plans to add a third jab, as they struggle to contain the Delta variant.

U.S authorities, warning that Covid-19 vaccination effectiveness decreased over time, said on Wednesday they had authorised booster shots for all Americans from 20 September. The booster would be given eight months after an individual has been fully vaccinated.

While the vaccines remain “remarkably effective” in reducing the risk of severe disease, hospitalisation and death from the effects of Covid, said officials, protection could diminish in the months ahead without boosted immunisation.

Washington had already authorised an extra dose for people with weakened immune systems. Israel has also begun administering third doses to Israelis 50 and over.

But WHO experts insisted the science was still not clear on booster doses of Covid vaccines and stressed that far more important was ensuring people in low-income countries where vaccination was lagging received jabs.

Dr Tedros Adhanom Ghebreyesus, the director general of the WHO, said: “What is clear is that it’s critical to get first shots into arms and protect the most vulnerable before boosters are rolled out. The divide between the haves and have nots will only grow larger if manufacturers and leaders prioritise booster shots over supply to low- and middle-income countries,”

Tedros voiced outrage at reports that the single-dose Johnson & Johnson vaccine being produced in South Africa was being shipped for use in Europe “where virtually all adults have been offered vaccines at this point”.

“We urge J&J to urgently prioritise distribution of their vaccines to Africa before considering supplies to rich countries that already have sufficient access,” he said. “Vaccine injustice is a shame on all humanity and if we don’t tackle it together, we will prolong the acute stage of this pandemic for years when it could be over in a matter of months.”

South African NGOs have denounced the shipments from as “vaccine apartheid” when less than 2% of 1.3 billion Africans have been fully vaccinated so far.

Millions of doses produced in South Africa have been exported since March to Europe and the US, several NGOs said in a joint statement on Tuesday.

“J&J are complicit in vaccine apartheid, diverting doses from those who really need them to the wealthiest countries on Earth,” Fatima Hassan of Health Justice Initiative told AFP. “It’s colonialist extraction, plain and simple.”

Doses are assembled and packaged in South Africa by the pharmaceutical group Aspen in Gqeberha, formerly known as Port Elizabeth.

Dr Matthew Kavanagh of the Health Law Institute at Georgetown University said: “Global allocation of vaccines is currently not being made by public health officials but instead by a handful of company officials, who consistently prioritise Europeans and north Americans over Africans.