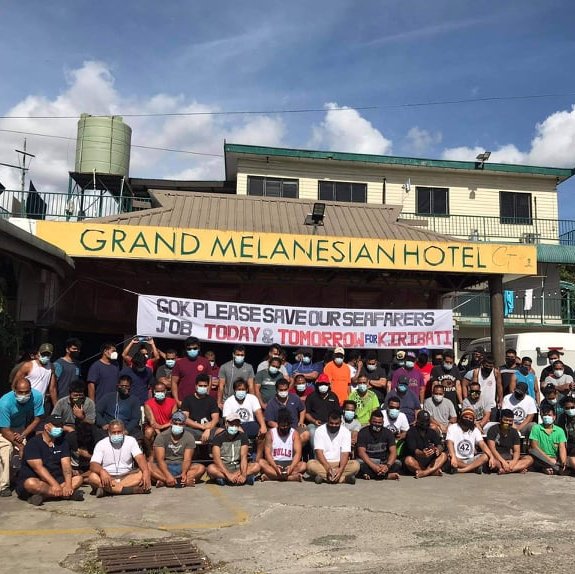 Hundreds of Kiribati seafarers stranded overseas are pleading with their government to allow them to return home as the country continues to shut its border to international flights.

Captain Tekemaua Kiraua is among 165 seafarers who’ve been in Fiji since March, he says the long wait is affecting their mental health.

With a COVID-19 outbreak sweeping Fiji, they’ve been confined to their hotel in Nadi where their meals and room is paid for by the German shipping company they work for.

But since arriving in Fiji their basic wages have stopped and the men can no longer send money home.

“We have kids who go to school, some of our seamen lost their wives they went for another wife…It’s a very sad thing, sitting down here doing nothing, earning nothing and all the time you’re occupied with problems,” he said.

As parliament meets this week Captain Kiraua said its important that their situation is raised and discussed to pressure government into allowing them home.

Their situation has prompted a consortium of German shipping companies to terminate a decades long agreement to train and recruit i-Kiribati workers.

The companies said they could no longer recruit workers without a way to return them home and ended the arrangement in June after talks with the government collapsed.

Pastor Matthias Ristau is the Chaplain at the Port of Hamburg in Germany where he is supporting another 20 stranded iKiribati seafarers.

“There are different ways to bring them home, maybe via Australia… It is technically possible, it’s financially possible. It’s just that the government has to make it possible saying yes, we will do it,” he said.

He said the end to the work arrangement means seafarers on Kiribati would effectively lose their jobs and that would have devastated the community.

But he’s still hopeful that a last minute solution can be reached before December, which is when the companies completely pull out of Kiribati.

As parliament meets this week family members, including Captain Kiraua’s wife Aenererei are hoping for good news on the work arrangement with German shippers and on the return of their loved ones.

“My husband is not here, it’s a big burden. And now I am thinking of him, and wishing he is back,” she said..