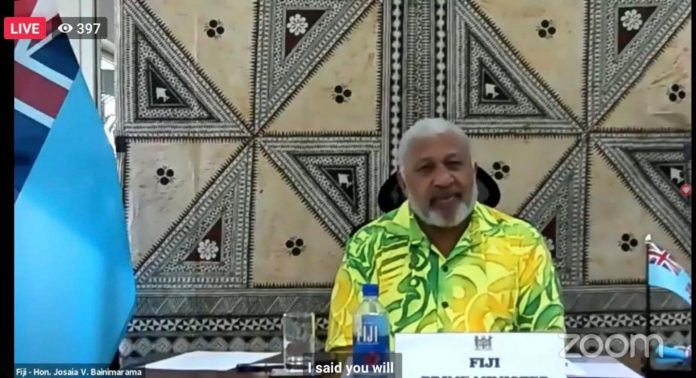 Fiji’s Prime Minister Frank Bainimarama used his inaugural speech as the new chair of the Pacific Islands Forum to offer an apology to the Micronesian members of the Pacific grouping who were angered by the way the Forum rejected their nominee for the Forum Secretary General job.

“I offer you my deepest apology,” said Bainimarama at the handover ceremony done virtually at the start of the 51st Pacific Islands Forum Leaders’ retreat today.

“We could have handled it better,” he added.

All five Micronesian members of the Forum – Federated States of Micronesia, Kiribati, Marshall Islands, Nauru and Palau – announced the decision to withdraw from the Pacific leaders group soon after the leaders decision last February to appoint Henry Puna – former prime minister of Cook Islands – the new Forum SG, ahead of Micronesia’s candidate, Ambassador Gerald Zakios from the Marshall Islands.

The Micronesians had argued that it was Micronesia’s turn to nominate one of their own for the SG position, replacing Dame Meg Taylor of Papua New Guinea.

At the start of today’s Forum Leaders’ retreat, only Nauru’s President Lionel Aingimea was present.

Outgoing Pacific Islands Forum chair Kausea Natano, who’s Prime Minister of Tuvalu made mention of the Micronesians in his handover address, and although he gave no clue as to whether his attempts to win back the Micronesians into the Forum have had any success, he stressed “unity and solidarity” for the Pacific regional bloc.

He believes the Pacific Way of talanoa and dialogue as the way forward to resolving the impasse between the northern Micronesian nations and their southern Pacific neighbours.

The dialogue should be “frank and respectful,” he said.

Prime Minister Natano also spoke about the need for the islands of the Pacific to stay the course on climate change, that their voices ought to be “united and loud.”

Both Scott Morrison of Australia and Jacinda Ardern of New Zealand were at the opening of the Leaders Retreat this morning, as well the Pacific Islands Forum’s newest member, Fiame Naomi Mata’afa, Prime Minister of Samoa.

Prime Minister Bainimarama congratulated Prime Minister Fiame by stating that while her coming into office was “not easy,” her achievement was still a proud milestone.

As the new Forum chair, and recalling his navigation days as a navy boat commander, Bainimarama said the Forum’s 2050 Strategy for the Blue Pacific Continent would be the ‘northern star’ in chartering the work of the regional body.

The strategy is on the agenda of the leaders’ one-day retreat today together with a common position on the incoming climate change negotiations in COP26 in Scotland in October, as well as a review of a joint forum action on combatting COVID-19.

In addition to speeches of the outgoing and incoming chair of the Pacific Islands Forum, this morning’s opening of the 51st Leaders retreat was also addressed by the new Forum Secretary General Henry Puna, as well as an address via video by United States President, Joe Biden.

A video to mark the 50th anniversary of the Pacific Islands Forum was also screened.