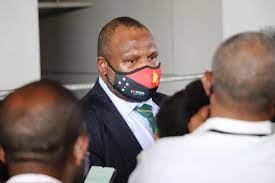 The ministers are Telefomin MP Solan Mirism, the Defence Minister, and Deputy Prime Minister and Minister for Commerce and Industry Sam Basil, who is Bulolo MP.

Mirisim had three charges of the 22 allegations of misconduct in office against him struck out by the tribunal after the public prosecutor indicated that the provisions relied upon were wrong and misconceived.

The tribunal, chaired by Justice Les Gavara-Nanu, told Mirisim that he would still have to answer to the remaining allegations.

Mirisim had pleaded guilty to declaring false and misleading information in the annual statement for 2011/2012 and 2012/2013.

The tribunal rejected Mirisim’s submission to throw out the remaining allegations.

The tribunal inquiring into misconduct allegations against Basil will sit this Friday.

Meanwhile, Marape has rubbished a claim that national security has been compromised by the presence of foreign advisers in State agencies.

For example; he said the Australian Federal Police (AFP) were in the country to “assist us in a technical capacity”.

“We have bilateral and multilateral partners who continue to work with the country – not only the AFP but (also) the World Health Organisation, Japan International Cooperation Agency and the United Nations,” Marape said.

He was responding to a statement by Opposition Leader Belden Namah cautioning the Government to ensure that national security was not compromised by foreign interests operating as advisers in strategic government agencies.

Namah singled out Australian advisers in the offices of the Commander of the PNG Defence Force, the Commissioner of Police, the Departments of Treasury, National Planning and Monitoring, Finance and the National Statistics Office.

“While we treasure the traditional and enduring ties we have with Australia, we must remind ourselves and our bilateral and multilateral partners that we are also a sovereign independent state,” Namah said.

Marape said “the AFP are not here to influence us nor do things contrary to law”.

“They are here on an agreement,” he said.

“The AFP are here to assist us in technical capacities. They are not here to infiltrate our government systems.