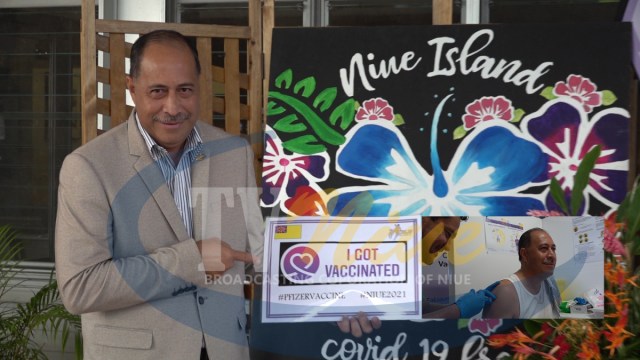 Size isn’t everything, but when it comes to COVID-19 vaccinations, being small certainly helps.

Niue, a Pacific Island nation with a population of 1,600, was recently celebrated for reaching “herd immunity” in its fight against COVID-19.

It has fully vaccinated 97 percent of its eligible population with Pfizer doses donated by New Zealand.

“Niue is one of the few countries in the world to be COVID-19 free and to have achieved this historic milestone,” the Niue government said.

Its Minister of Health, Sauni Tongatule, said the country was now “looking ahead to opening borders”.

But, despite these high vaccination rates, health experts warn countries like Niue may still be vulnerable to a COVID outbreak and have recommended they do not open borders too quickly.

Dr Colin Tukuitonga, Associate Professor of Public Health at the University of Auckland, said herd immunity was not an appropriate target.

“In the case of COVID … even though we have high vaccination coverage, it doesn’t automatically mean herd immunity,” Dr Tukuitonga said.

Australian Prime Minister Scott Morrison said 80 percent of Australia’s eligible population would need to have had two doses of a vaccine before travel restrictions were eased for those who’d had the shot.

But public health experts are urging countries to reconsider the concept of population-wide protection when it comes to COVID.

They warn it is almost impossible that countries can eradicate or completely avoid COVID infections, even when high levels of vaccination are reached.

Herd immunity is achieved when a large portion of a population becomes protected from a disease either through infection or vaccination.

When this threshold is eventually reached, community transmission is prevented and the outbreak fizzles out.

Estimates for Australia’s herd immunity have so far hovered around 80 percent, but the figure depends on the type of vaccine people receive, and how they fare against new variants.

Several Pacific islands, like Guam, have reached that target already among their adult population.

Nauru, one of the smallest countries in the world, has declared itself 90 percent fully vaccinated.

Others are fast approaching those targets, with the Federated States of Micronesia (FSM) making vaccines compulsory for all adults.

Its president David Panuelo told the ABC he hoped FSM would “reach herd immunity by Christmas”.

But studies have cast doubt over the ability of countries to build herd immunity and protect populations completely from future COVID outbreaks.

That’s because it appears that the neutralising antibodies that protect cells from the virus are strongest over the first months after vaccination or infection, but begin to decay after that.

Many manufacturers already have variant-specific vaccines in clinical trials for booster shots down the track.

“We know that’s not going to happen, that is extremely unlikely to happen, and this will be an endemic virus,” Dr Russell said.

Dr Tukuitonga said herd immunity was not a “silver bullet”.

“In fact, you don’t know if you have herd immunity until there is an outbreak,” Dr Tukuitonga said.

“I emphasise the unpredictability of the Delta variant … we don’t really know how it’s going to behave.”

The vaccination rollout has helped Pacific nations, many of which rely on income from tourism, to open up with more confidence.

The Cook Islands has vaccinated almost 95 percent of its target population with Pfizer donations from New Zealand, and since May a travel bubble has been in place between the two countries.

Secretary of health Bob Williams said he expected Cook Islands finish its rollout before the end of the month, and that health authorities would monitor borders as restrictions eased.

“Australia could potentially be on the list of options for us to open up our border,” he said.

Jana Foster, manager of Raela Villas Day Spa in the Cook Islands, is thankful the country is finally opening up.

Her business lost almost a year’s worth of income during the pandemic, and thanks to the travel bubble with New Zealand, her rooms are fully booked until October.

“It’s probably good for the tourism that’s coming in to know that we’ve been vaccinated,” Foster said.

“All my staff are vaccinated … it wasn’t something that I forced on my staff. They actually went and got it done.”

But despite her business picking up, she said she was “not in a rush” for Cook Islands to further open its borders.

“We’d rather everybody has this stuff under control before they try and come across here,” Foster said.

“Because once it’s in here, it could potentially just wipe everybody out.”

Dr Russell praised countries in the Pacific that have reached high levels of vaccination, but said border protection policies would still need to be in place to avoid devastating outbreaks.

“It certainly is a wonderful achievement, but it’s not suddenly, ‘Let’s go back to pre-COVID life’. It’s certainly not going to be like that,” he said.

Delta variant has arrived in Guam